/  Resources  /  The Landmark report of the High Level Working Group on the Health and Human Rights of Women, Children and Adolescents

The Landmark report of the High Level Working Group on the Health and Human Rights of Women, Children and Adolescents 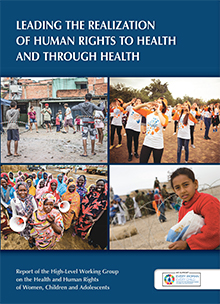 The landmark report of the High Level Working Group on the Health and Human Rights of Women, Children and Adolescents was released on 22nd May 2017.

The High Level Working Group on the Health and Human Rights of Women, Children and Adolescents was announced last year by the World Health Organization (WHO) and the Office of the High Commissioner for Human Rights (OHCHR). The group responds to the demand of the Sustainable Development Goals and the Global Strategy for Women’s, Children’s and Adolescents’ Health to leave no one behind by rallying political support for a human rights based approach to health. To do so, the High Level Working Group calls for greater cooperation between the WHO and the UN Human Rights Office and between the World Health Assembly and the Human Rights Council.

We all have the right to the highest attainable standard of physical and mental health, without discrimination, wherever we are, and whatever our circumstances.

This report refers throughout to rights “to health and through health” to express this fact: the right to health does not stand alone but is indivisible from other human rights. Good health not only depends on but is also a prerequisite for pursuing other rights. Human rights cannot be fully enjoyed without health; likewise, health cannot be fully enjoyed without the dignity that is upheld by all other human rights.

The world is at a watershed moment that could lead to greater dignity for everyone throughout their lives, but only if Governments invest in the integral relationship between human rights and health specifically for women, children and adolescents, a UN-backed group of politicians and health and human rights experts has said.

“Leadership is fundamental to maximize the benefits of the interplay between health and human rights. If human rights to – and through – health are not at the centre of what we do, the 2030 Sustainable Development Agenda will surely fail,” said Tarja Halonen, former President of Finland and co-chair of the High-Level Group on the Health and Human Rights of Women, Children and Adolescents, which today published a report on realizing human rights to and through health.

The High-Level Group*, which was established by the World Health Organization and the UN Human Rights Office in May 2016, emphasizes that the largest ever generation of adolescents is an unprecedented opportunity for sustainable development, provided their rights to health and through health are respected. Yet the Group warns that there is an erosion of – and in some cases backlash against – human rights worldwide, which threatens to undermine progress in improving the health and well-being of all people.

The report emphasizes that against a backdrop of rising nationalism, marginalization – including of undocumented migrants, refugees, slum dwellers and indigenous peoples – proceeds hand in hand with violations of rights, with particularly dire consequences for women, children and adolescents and undermining stability for entire societies.

“The realization of human rights in the context of sexual and reproductive health, including access to safe abortion – is not only seriously uneven or unattainable at the country-level, it is under direct attack, risking the reversal of hard-won advances in preventable maternal and child mortality and undermining the health of adolescents worldwide,” said Tarja Halonen.

Since the right to health was recognized in 1946 in the Constitution of the World Health Organization and then in 1948 with the adoption of the Universal Declaration of Human Rights, the right has been reaffirmed in numerous international treaties and political commitments ratified and adopted by States.

“Many promises have been made but still millions of women, children and adolescents are denied their fundamental human rights, leading to preventable deaths, injury, physical and mental illness and other harm. Despite medical breakthroughs and scientific advances, societies continue to undervalue the health and dignity of women, children and adolescents, undermining their rights and dismissing their rightful claims,” said Hina Jilani, member of the Elders and the Group’s co-chair.

“Translating human rights norms into tangible action and results hinges on local and national leadership. Health workers, as human rights defenders, can play an indispensable role in supporting action and holding authorities accountable to ensuring all people are able to enjoy their right to health. They must be protected as they do so,” explained Dr. Denis Mukwege, renowned gynecologist in the Democratic Republic of Congo and rapporteur of the Group.

The High-Level Group is calling on Governments to take steps to allocate at least 5% of GDP for public health spending, which is the recommended percentage for achieving Universal Health Coverage.

“We know what needs doing, and how to do it. We know why we should do it. We also know it makes financial sense. What we need is more concrete and sustained political commitment and leadership,” the report says.

The report is now online and available through the following links:

You can  find the Advocacy-Kit_Health-Human-Rights-Working-Group-Report_22May here.