/  Resources  /  The centrality of Sexuality for understanding child, early and forced Marriage

The centrality of Sexuality for understanding child, early and forced Marriage 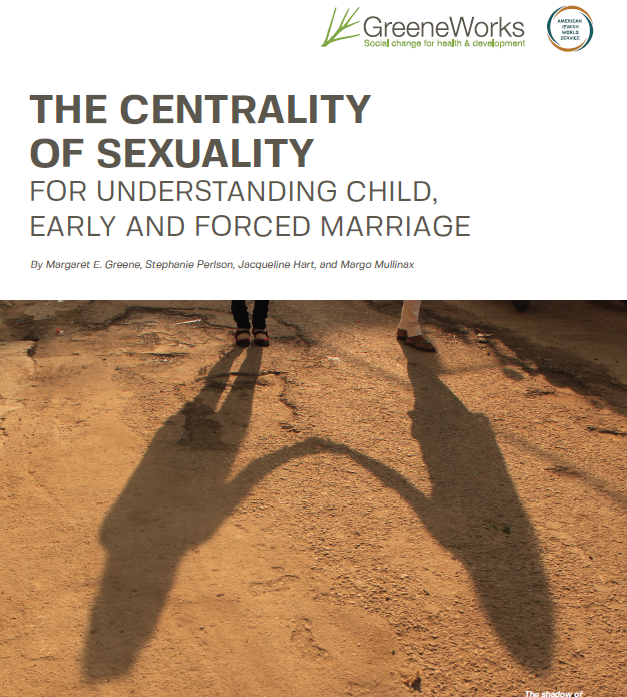 Poverty has been put forth as a leading reason for child, early and forced marriage (CEFM), but if CEFM is driven by poverty, why are boys not marrying as early as girls? The reason is that child, early, and forced marriage is an expression of gender inequality and the structures of patriarchy:
unlike boys, adolescent girls face lives that are ruled by management of their sexuality.

Child, early and forced marriage is a global problem that violates girls’ human rights, curtails their schooling, harms their health, and sharply constrains their futures.1 Young wives’ low status in their marital households often subjects them to long hours of intense labor, social isolation, greater risk of physical, sexual, and emotional violence, the risks attending early pregnancy, and little say over anything that affects them.

As a consequence of the UN’s Sustainable Development Goals (SDGs), adopted in 2015, and the global movement to end child marriage, child, early, and forced marriage has attracted increasing global attention. We can thus expect a growing stream of resources and global and national mandates to eradicate the practice. This presents a momentous opportunity to work to end child marriage and contribute to reducing gender inequality.

Child marriage is most prevalent in South Asia and sub-Saharan Africa, and in some parts of Latin America, the Caribbean, and the Middle East.3 In South Asia, almost half of girls marry before age 18, and one in six before age 15. Various regions of Africa follow South Asia in prevalence, with around 40 percent of women aged 20 to 24 married in childhood. In the United States, quite a few states allow marriage before age 18, and allow exceptions to their age of consent, allowing girls to marry even younger, to be made by parents, judges, and in cases of pregnancy.4 Worldwide, more than 700 million women alive today were married before their 18th birthdays, and about 250 million married before age 15.5 Child marriage endangers girls’ health. The highest adolescent birth rates occur where child marriage is most common.6 Of all births to adolescents, 95 percent
take place in developing countries, and 90 percent of these births are to girls in union or marriage. Complications from pregnancy and childbirth combined are a leading cause of death for girls 15 to 19 in developing countries.7 Child marriage also puts girls at risk of HIV and sexually transmitted
infections. Globally, young women account for well over half (from 60 to 72 percent in Sub-Saharan Africa) of the young people living with HIV and they bear a greater burden of STI, with the highest rates among 20 to 24-year-olds. Their developing reproductive and immune systems make them
more susceptible to STIs and HIV, which older partners are more likely to transmit, especially if these partners reject condoms.8

Since adolescence would otherwise be a time for growth, learning, and identity formation, CEFM obliges girls to take up adult roles and responsibilities before they are physically, emotionally, and psychologically prepared . They may be socially isolated and face unwanted separation from family and friends. Many child brides experience the symptoms of child sexual abuse and post-traumatic stress, including hopelessness, helplessness, and depression.9

Child marriage also reduces girls’ chances of leading economically productive lives.10 Girls who marry typically leave school early, especially if they are poor, further constraining their opportunities.11 By limiting girls’ opportunities and exposing them to health risks, child marriage makes it more difficult for girls and their future families to move out of poverty.12 The children of young and poorly educated girls tend to be less healthy, to  perform worse in school, and to have lower earnings as adults, contributing to the perpetuation of poverty from one generation to the next.
Girls’ and women’s lack of autonomy regarding sexuality is a core aspect of patriarchy. To improve girls’ lives we must engage with sexuality. The reality, however, is that waves of development interventions aimed at gender inequality and girls and women’s rights and empowerment have largely remained silent on sexuality. Now, with the establishment of the SDGs, the world faces an important opportunity to broaden and intensify the ways in which the community of donors, policymakers, and practitioners engage in the struggle to end gender inequality.

The purpose of this paper is to provide a research-based argument for the critical importance of addressing sexuality if we are to overcome patriarchy and gender inequality, using the effort to end CEFM as an important example. This paper presents the research evidence for the multiple ways in  hich sexuality is central to norms and practices around CEFM, and provides programmatic examples of the ways in which addressing sexuality  ontributes to the greater empowerment of girls and to gender equality.

This paper reviews the history of the international development field’s neglect of sexuality’s central role in gender inequality and efforts to end it. It analyzes the field’s intellectual legacy, the discomfort of its practitioners with sexuality-related matters, its focus on individuals and homogenous populations rather than on relationships, and its neglect of the interplay between gender inequality and the cultural meanings of sexuality. The paper reviews some of the (few) promising ways in which sexuality has been addressed in programming, and highlights the themes emerging from some successful experiences. And it closes by affirming the momentous opportunity presented by the Sustainable Development Goals to make sure that this iteration of global focus on the reduction of gender inequality includes sexuality: a core aspect of patriarchy which has not, as yet, been adequately addressed.

Read the ‘The centrality of Sexuality for understanding child, early and forced Marriage’