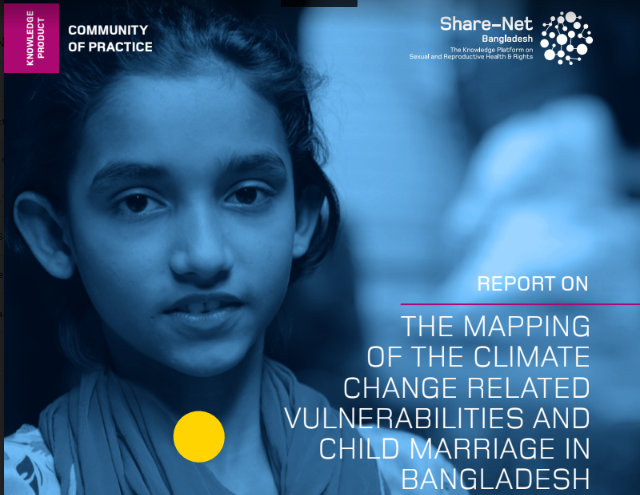 This knowledge product has been published by the Share-Net Bangladesh Child Marriage in Bangladesh Community of Practise.

For this mapping exercise, we first identified 106 potential organizations that might have CM-related projects/programs in the last 5 years and then reached out to them via email and personal communication over the phone for detailed information through a data collection tool. As a result, data from a total of 24 programs/projects were gathered from 16 organizations. Fourteen of the 24 projects or programs explicitly aimed to reduce child marriages as narrated in the project/program objectives. Among the 24 mapped programs/ projects, 14 were completed, and ten were still ongoing.

We found that creating mass awareness regarding the problems of child marriage was the highest occurring intervention/approach adopted by the majority of the programs mapped in our exercise, followed by education and livelihood intervention. Our mapped projects on child marriage covered 45 districts of Bangladesh, where the highest three projects/programs were found in Bagura, Bandarban, and Dhaka districts each. For majority programs, the primary target group included adolescents (10-19), adults (18 and above) of both sexes. Fourteen programs/projects had secondary beneficiaries, including parents, service providers, community people-like religious leaders, and other gatekeepers.

Among the 24 projects/programs, 21 had specified program/ project monitoring and evaluation mechanisms. Fifteen programs/projects had at least one implementing or research partner. Donor-related information was available for 19 programs/projects. However, there are some significant limitations of our mapping exercise. Given the time and resource constraints and the ongoing COVID-19 pandemic, physical data collection was not possible, which might increase the number of mapped programs/projects.

Download Report: Report on the Mapping of the Climate Change Related Vulnerabilities and Child Marriage in Bangladesh

Professor Dr. Mohammad Bellal Hossain, University of Dhaka is working as a Professor at the Department of Population Sciences, University of Dhaka. He was the Chairman of the same department for the period of March 2012 to March 2015. He has obtained his first post-graduate degree in Sociology from the University of Dhaka and then obtained another post-graduate degree in Sexually Transmitted Infections/HIV Related Medicine from the University of Sydney, Australia. He has obtained his PhD in Public Health and Policy from the London School of Hygiene & Tropical Medicine, UK. He has around 20 years of teaching and research experience on various aspects like sexual and reproductive health and rights, child marriage, gender-biased sex selection, and the older population. He has work experience in Australia, Bangladesh, and the UK. He has published more than 40 journal articles in peer-reviewed journals, book chapters, and reports both at home and abroad, and presented many papers in various international conferences. He is a British Commonwealth Scholar and also received the AusAID award.

Sigma Ainul, Population Council There is mounting evidence that climate change is having a profound influence on nature and people worldwide. The current research sought to establish a relationship between SRHR vulnerability and climate change in Bangladesh. The study is based on previously published research and publicly accessible data on SRHR, climate change, and disaster-prone populations. The produced map in the poster depicts that the areas classified as more prone to natural hazards are also where women are more vulnerable concerning health issues; especially, their Sexual & Reproductive health. The results indicate that climate-induced risks may directly impact women, burden health systems, and obstruct access to SRHR services.