In April 2017, production on a video about child marriage began in the Terai region of Nepal. The purpose behind the film was to provide a video resource as part of a toolkit for organisations and change makers working with young people at risk of child marriage. In the Terai, close to the Indian border, child marriage is highly prevalent. Dalit communities in particular can be socially excluded and geographically isolated with little access to education and information about the laws and rights around child marriage.

Source: The Cultural Context of Child Marriage in Nepal and Bangladesh. CARE February 2016.

As part of a consortium working on the toolkit resource, CWIN Nepal wanted to focus on providing information and guidance to both boys and girls. Where previous campaign focus has been on girls and girls’ empowerment, it was felt that bringing boys and men into the movement was an important step in ending the tradition of child marriage.

Within a wider campaign of education, training and vocational opportunities, a video which shared information, advice and guidance from young boys and girls rather than adult ‘experts’ was designed to appeal directly to this target audience as a peer-to-peer information exchange.

Mero Jivan Mero Rojai is a participatory film project working with young people from two districts in Nepal, from communities at high risk of child marriage. The project aims to offer peer-to-peer advice and guidance on the effects of child marriage, how to get help and offers inspiration to other youth groups to start their own stop child marriage campaign. Using participatory techniques and principals, several days workshopping and discussion took place in the villages, and all the information in the film came from the young people themselves.  The video is meant to be used in the context of an educational toolkit on child marriage issues in Nepal.

You can watch here a short version of the film. 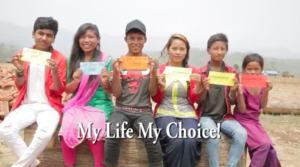