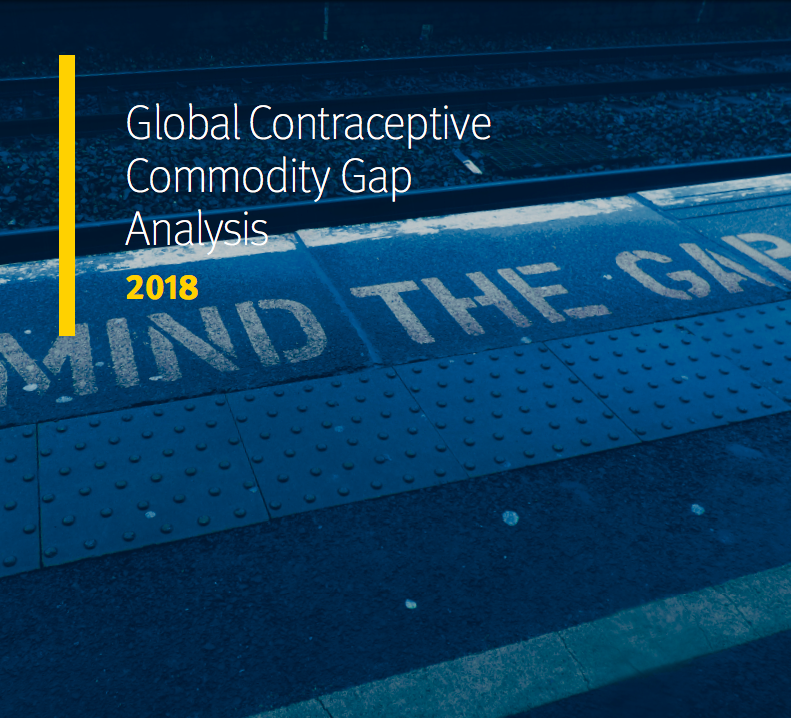 This edition of Global Contraceptive Commodity Gap Analysis 2018 (CGA 2018) is the Reproductive Health Supplies Coalition’s fourth report to highlight disparities between the growing demand for family planning services and the resource base required to provide the supplies on which services depend.

The first two reports, published in 2001 and 2009, examined funding shortfalls in the public sector alone. Our third report, the Global Contraceptive Commodity Gap Analysis 2016 (CGA 2016), broadened the scope of analysis to include the private as well as the public sector. It
expanded the range of countries to include 135 low-and-middle-income countries, and it projected two growth scenarios: one based on historical trajectory, the other on the achievement of the FP2020 goal of 120 million
additional users of family planning in 2020. It also drew on input from the reproductive health community to identify four key questions to guide the analysis:

In this edition of the CGA, we follow the broad outlines set out in 2016. We project growth in contraceptive use along each country’s historical trajectory and revisit the four key questions. We also, for the first time, probe more deeply into the division between the public and private sectors. We draw on updated data from the diverse sources we used last year, and introduce entirely new data – particularly data on private sector pricing and procurement. We also reflect, in a more nuanced way, the implications of declining public sector funding for the role of the private sector, in terms of the latter’s absorptive capacity, equity, and contraceptive availability.

The results of this analysis suggest that by 2020, there will be 493 million users of contraception in the 135 low- and middle-income countries, of whom 337 million will live in the 69 FP2020 countries.

Meeting their contraceptive consumption needs over the next three years will require $8.45 billion across the 135 countries, and $3.5 billion in the FP2020 countries alone. In both cases, out of pocket expenditures will account for the vast majority of that financing. The new data have also allowed us to see an inverse relationship between cost and users across the public and private sectors. Among the 69 FP2020 countries, for example, we found that while the public sector contributed only 37% to total spending, it actually supported 58% of users.

Many of the findings and observations contained in this report have already been shared at public fora and our analysis has benefitted immensely from the feedback to emerge from these exchanges. This has been especially true with respect to our analysis of private sector pricing, which now carefully applies both full market price retail sales (based on newly acquired pricing and sales data from IQVIA) and subsidized products sold by social marketing and other
non-public organizations.

Through this insight and a richer array of data, we can better appreciate the differences not only between the public and private sectors, but also within the sectors themselves. The data reveal dramatic price variations for core contraceptive commodities, and they document how these variations manifest themselves, both geographically and by product. As our community increasingly turns its attention to operationalizing the Sustainable Development Goals, understanding better the role of donors, national governments, and the private sector will be critical.

Commodity financing over the next decade will see a declining donor resource base – about that, there is little debate. Out of pocket expenditures will increase, as will the contributions of national governments. But as we plan for the coming decade, the real challenge will be to figure how to make the most of our existing resource base; how to allocate resources that maximize both comparative advantages and manageable interests. This report goes along way to providing the evidence that will help answer these pressing questions. It reminds us, as the saying goes,
to mind the gap.

Read the full report by using this link.