/  Resources  /  Girls to the Front – A snapshot of girl-led organising

Girls to the Front – A snapshot of girl-led organising 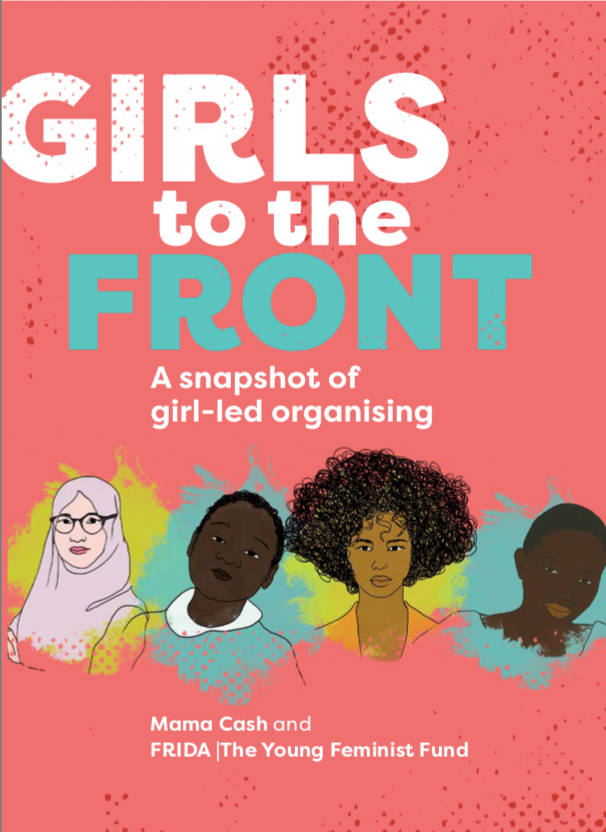 It’s tough being a girl. All over the world, girls face multiple layers of discrimination: for being female, for being young and for the other multiple identities that define them, such as race, class, sexual orientation and gender
identity. In the face of these challenges, girls worldwide are organising and joining forces to have their agency and autonomy recognised, respected and celebrated. Who better to know what girls need than girls themselves?

Girls and their organisations and/or initiatives are important to social movements. Mama Cash and FRIDA | The Young Feminist Fund, two women’s funds long committed to supporting girls and their organising, decided to commission a research study to find out more about how girls are organising across the world. This participatory, feminist, intersectional research placed girls at the centre, making them partners of the study. The participation of Girl Advisors— activists who hail from five different countries and have diverse backgrounds, profiles and
skills– brought invaluable input to the table.

The research used in-depth interviews and an online questionnaire, as well as an exhaustive desk review to collect data from girl-led groups and organisations, girl-centred organisations and the stakeholders that support them at different levels. This is an exciting opportunity to spotlight how girl-led organising takes place and how funders can provide flexible support that responds to the needs of girls and their organising.

Below are some of the main findings of the research study.

The characteristics of girls’ organising Girls everywhere are organising. Initiatives and organisations led by girls 18 and under are usually unregistered and less formally established than traditional adultled groups. One of the main findings from this research study was that girls are finding creative and innovative ways to organise that allow them to circumvent the many barriers they face in coming together. They have shown themselves to be big fans of social networks, with technology playing a central role in the way they organise. But despite making extensive use of it, lack of access is a barrier for girls to make more and better use of new technologies.

Girls are inspired by each other and by their past involvement in civil society.  Some decide to start their own, independent initiatives, but many more decide to launch their initiatives within already existing organisations. This grants them access to technical assistance, financial resources, meeting spaces and networking opportunities with other like-minded groups. The girl-led groups and initiatives that are born and operate within more established organisations usually have a high degree of programmatic autonomy though rarely have full control over financial management.

The mere existence of these girl-led groups in the face of a myriad of barriers and challenges is in itself a great success. However, there are many ways in which girls define and assess their success, and these don’t always coincide with traditional, adult-centred definitions of success.

Not all girl-led groups want to be registered or formalised. Although funding to informal groups is increasingly available throughout the world, registration is still a requirement for the majority of donors. Girls recognise that formalising their initiatives would give them more access to a wider range of sources of funding and support. While for some this may be the goal, others choose not to register. Some do not feel ready to take on the legal and financial responsibilities of registration while others believe registration would restrict their work. In some cases, there is legal minimum age requirement for registration, thus excluding girls who may want to register but are too young.

The barriers to girls’ organising

Stereotypes about adolescents as a barrier to girls’ organising. The majority of girls approached as part of this study felt they were not taken seriously in their work and activism by adults. Girls are particularly concerned and hurt by the fact that their work does not seem to be taken seriously by older feminists. The closing space for civil society heavily affects girl activists and their initiatives. Multiple studies have shown that formal and informal state interventions to control civil society have a disproportionate impact on the political voice of women and trans people. This phenomenon extends to girl activists and girl-led groups and organisations, adding age as yet another cross-cutting axis of oppression for girls.

It is crucial to support girls in a non-ageist and non-sexist way that respects them and recognises the importance of their experience and their work. To do so requires recognising sexism and ageism faced by girls and valuing their struggles and experiences as much as those of adults. Girls must continue to be offered opportunities and support initiatives that enhance mutual learning and experience sharing. Likewise, funders must continue to provide flexible and responsive funding to unregistered, grassroots girl-led groups. When involving girls in initiatives,
there must be recognition of their time, effort and expertise and they should be compensated accordingly in the way most beneficial to them, whether that is monetarily and/or through training, mentorship or internship programmes.