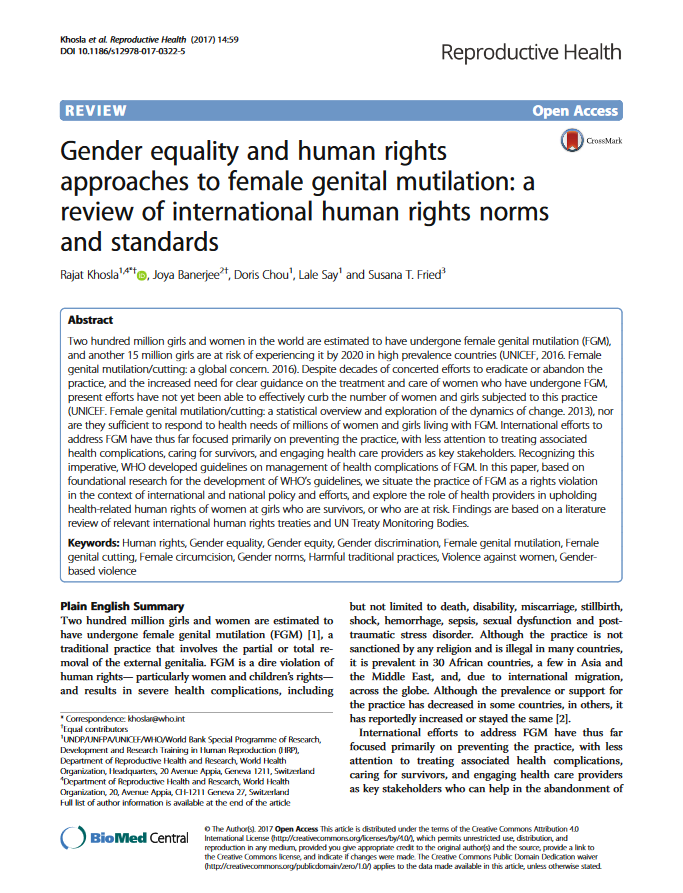 Two hundred million girls and women in the world are estimated to have undergone female genital mutilation (FGM), and another 15 million girls are at risk of experiencing it by 2020 in high prevalence countries (UNICEF, 2016. Female genital mutilation/cutting: a global concern. 2016). Despite decades of concerted efforts to eradicate or abandon the practice, and the increased need for clear guidance on the treatment and care of women who have undergone FGM, present efforts have not yet been able to effectively curb the number of women and girls subjected to this practice (UNICEF. Female genital mutilation/cutting: a statistical overview and exploration of the dynamics of change. 2013), nor are they sufficient to respond to health needs of millions of women and girls living with FGM. International efforts to address FGM have thus far focused primarily on preventing the practice, with less attention to treating associated health complications, caring for survivors, and engaging health care providers as key stakeholders. Recognizing this imperative, WHO developed guidelines on management of health complications of FGM. In this paper, based on foundational research for the development of WHO’s guidelines, we situate the practice of FGM as a rights violation in the context of international and national policy and efforts, and explore the role of health providers in upholding health-related human rights of women at girls who are survivors, or who are at risk. Findings are based on a literature review of relevant international human rights treaties and UN Treaty Monitoring Bodies.

Two hundred million girls and women are estimated to have undergone female genital mutilation (FGM) [1], a traditional practice that involves the partial or total removal of the external genitalia. FGM is a dire violation of human rights— particularly women and children’s rights— and results in severe health complications, including but not limited to death, disability, miscarriage, stillbirth, shock, hemorrhage, sepsis, sexual dysfunction and post-traumatic stress disorder. Although the practice is not sanctioned by any religion and is illegal in many countries, it is prevalent in 30 African countries, a few in Asia and the Middle East, and, due to international migration, across the globe. Although the prevalence or support for the practice has decreased in some countries, in others, it has reportedly increased or stayed the same [2].

International efforts to address FGM have thus far focused primarily on preventing the practice, with less attention to treating associated health complications, caring for survivors, and engaging health care providers as key stakeholders who can help in the abandonment of the practice. Few pre or in-service training programs for health providers address how to recognize and treat FGM, and there are fewer tools and programs to provide healthcare to women who have undergone FGM, compared with those that prevent it from ever occurring. In addition, health providers are often reluctant to address the topic because they may feel they have no role in addressing cultural practices.

This led the World Health Organization to develop a set of guidelines for health providers to care for women living with FGM. This paper was commissioned as part of the development of these guidelines to ensure that health providers understand international policy and the human rights basis for upholding women and children’s human rights when it comes to FGM, especially their duty to never perform the procedure, to refuse requests to re-perform the procedure after childbirth, to prevent it from continuing, and to safeguard the rights of women and girls living with FGM.

You can open the full article here:
Gender equality and human rights approaches to female genital mutilation: a review of international human rights norms and standards