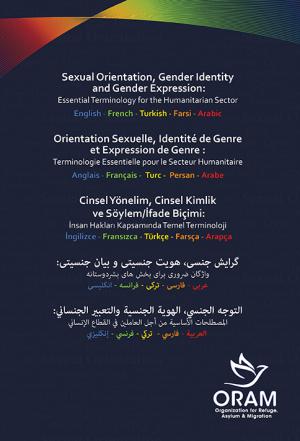 The comprehensive, 124-page glossary titled, “Sexual Orientation, Gender Identity and Gender Expression: Essential Terminology for the Humanitarian Sector” contains the most appropriate and culturally sensitive terms for communicating with lesbian, gay, bisexual and transgender individuals. The glossary is written in five languages, including English, French, Turkish, Farsi and Arabic to ensure its availability in key cultures and locations.  Additionally, the design of the hard copy version of the glossary is presented in a way that makes it effective for both Arabic and Farsi speakers, opening from right to left for those languages.

Visit www.oraminternational.org to download the glossary or to order a hard copy – free for governments, NGOs and other humanitarian professionals while supplies last.

“It’s critical that all humanitarian professionals understand the cultural sensitivities surrounding the safety and security of lesbian, gay, bisexual and transgender persons,” said Neil Grungras, Executive Director of the Organization for Refuge, Asylum & Migration (ORAM).  “In most languages worldwide, matters of sexual and gender diversity are shrouded in confusion and taboo. Until now, humanitarian and human rights professionals in governments, NGOs and United Nations agencies have been at a loss for respectful terminology in this area. Many unknowingly offend the very people they intend to help, addressing them with deeply offensive terms. This first-ever, comprehensive glossary of culturally and appropriate terminology is essential for helping to create a safe environment where sexually and gender diverse individuals can establish trust and be forthcoming about their needs and experiences.”

In most of the world’s languages, terminology related to the lives of LGBT individuals is limited and often times pejorative. Only a small handful of languages contain substantial culturally appropriate lexicons. This phenomenon is largely a function of the cultures in which these languages developed; until very recently, sexual and gender diversity was taboo in virtually all of the world’s cultures.

“The development of this ground-breaking glossary of LGBT terminology in five distinct languages is designed to benefit the work of humanitarian and refugee professionals around the globe,” continued Grungras. “By providing professionals with this helpful field guide, it will allow them to better address issues unique to LGBT people, encourage truthful self-disclosure and will hopefully create a greater awareness and understanding of the perspectives of those LGBT people with whom they interface with on a daily basis.”

Following the glossary, ORAM will release a full toolkit for the international humanitarian profession that will contain a variety of products designed to help LGBT individuals worldwide be treated with dignity and respect. The toolkit will include training modules, checklists for humanitarian professionals to create a safe space, and visual safe space collateral.

ORAM has directly trained over 1,600 refugee professionals working in United Nations, government, international NGO and community-based agencies in 14 countries, who in turn have assisted over a million refugees. Thousands of refugee and asylum workers around the world utilize ORAM’s tools and resources, which have benefited tens of thousands people in the past five years.

Founded in 2008, ORAM specializes in the protection of exceptionally vulnerable refugees, including LGBT refugees. A thought leader in refugee protection, we are trusted by governments, international agencies, aid organizations and refugees alike.