Exploring Child Marriage Around the World 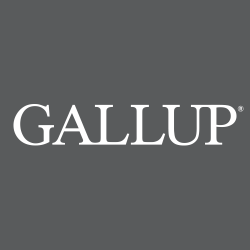 The age at which people first marry can have long-lasting implications for their physical, economic and social well-being — particularly when marriage first happens at a young age. As part of our forthcoming global research on child marriage, we used Gallup’s World Poll to get an idea of how many people worldwide between the ages of 15 and 19 are married — and to find out what life is like for these young married people.

The following are a few of the key findings:

Data from the past five years indicate that worldwide, about 6% of people between the ages of 15 and 19 are married. However, estimates are considerably higher in the Middle East and North Africa (7%), sub-Saharan Africa (9%) and South Asia (14%). While the percentages of young married people appear to have decreased between 2006-2010 and 2011-2015 in the Middle East and North Africa and sub-Saharan Africa, incidence has increased in South Asia and Southeast Asia over the same period. 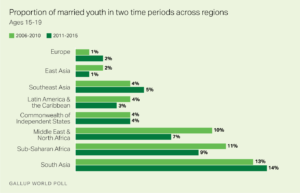 In every region of the world, married 15- to 19-year-olds are disproportionately female. In South Asia, for example, 20% of females in this age group are married versus 8% of males. South Asia is also one of the only regions where early marriage among males increased from 2006-2010 and 2011-2015. 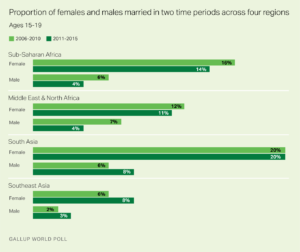 The gender gaps in early marriage may reflect — and further exacerbate — the gender inequality that exists in many of these regions. One case study of child marriage in the Amhara region of Ethiopia, where additional research shows 39% of females are married before the age of 15, found married adolescent girls have the fewest friends, the most limited exposure to media and are the least likely to have information about HIV.

Further, early marriage for these young women also likely means early pregnancy — which puts their health at risk. Worldwide, UNICEF estimates that 70,000 females between the ages of 15 and 19 die each year as a consequence of pregnancy or childbirth.

In most regions, young married females and males are at a clear disadvantage compared with those who are the same age and are not yet married: They generally have less access to communication, education and employment opportunities.

In almost all regions, married 15- to 19-year-olds have less education and access to communication resources such as cellphones and the internet. This lack of resources is most pronounced in the three regions with the highest prevalence of early marriage: South Asia, sub-Saharan Africa, and the Middle East and North Africa. 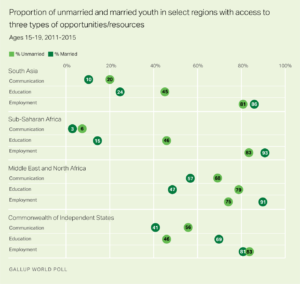 This analysis also showed that married youth have less access than their unmarried counterparts to basic resources such as food, water, income and shelter. While married youth tend to be employed at higher rates than unmarried youth, their lower levels of education may result in low-skill and low-wage jobs.

Our research was limited in several ways: Young people under the age of 15 are not surveyed through Gallup’s World Poll and are not included in the sample. Additionally, sample sizes were small in several cases, necessitating a heavy reliance on macro-analysis, rather than country-level or year-level analysis.

Increasing the number of subjects and collecting information about their ages when they are first married (as opposed to whether they are married), especially in the regions with the highest prevalence of early marriage, would improve estimates.

Knowing the current state of early marriage around the world allows stakeholders to address gender inequality and the gap in resources between married and unmarried young people. Because Gallup collects data at least annually through its World Poll, our findings are particularly pertinent. While the gender and location disparities in early marriage frequency have been identified before, our research provides updated and relevant information where other data sources may quickly become obsolete.