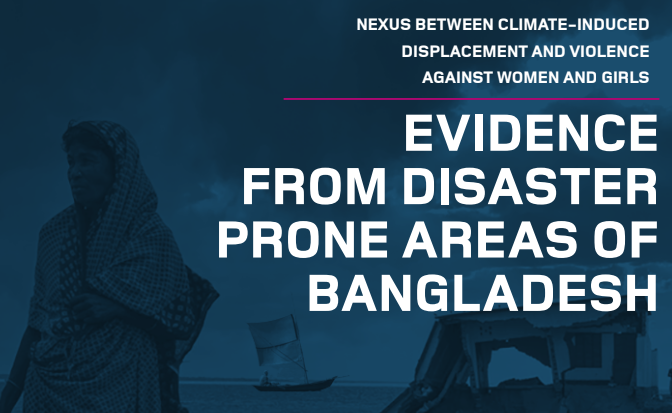 According to Human Development Report (2020), 54.2% of women aged 15 years and old witnessed violence by intimate partners, and 3% of women witnessed violence by a non- intimate partner. The BBS (2015) survey found that 70% of married women or girls have faced any sort of intimate partner abuse and half of them have been physically abused by their partner, and 3% took legal action against it. According to the report of Ain-o-Salish Kendra in (2020), a total number of 1,627 reported cases of rape were filed, which was 1413 in 2019 and 732 in 2018. Since Bangladesh witness frequent natural disasters every year, many people lose their homes and migrate elsewhere. Displacement of the populace owing to adverse climatic events triggers vulnerability and insecurity in the context of socio-economic well-being. Each year, extensive river erosion coupled with cyclonic disasters & salinity intrusion led to more climate displacements in Bangladesh. After natural disasters, there is a growing trend of women being subjected to violence. Domestic violence may be exacerbated by prejudice that remains even after a disaster and undermines physical and social well-being, increasing the likelihood of domestic violence. Job loss, poverty, and the loss
of loved ones cause tremendous mental stress, which leads to frustration and domestic violence.

The study is aiming to look into climate-induced displacement and its effect on violence against women in Bangladesh. The study will seek the consequences of climate change and the vulnerabilities, insecurity & psychological distresses they give rise to, along with the socio-cultural, economic, and political factors that gradually trigger violence against women among the displaced populace.

The study followed a qualitative approach and semi-structured interviews to understand how climate change displacement influences violence against the Shariatpur and Satkhira region. A set of questions were asked to the interviewees to perceive the reasons behind the actions. Ethical issues were taken into account regarding the reliability and acceptance of the questionnaire. ATLAS.ti (version 9) software was used to arrange, assemble and analyze the qualitative data. Major findings of the study are following:

a) Displacement, financial crisis, gender-based violence, early marriages are the most critical and common disaster impacts in disaster-prone areas

b) Family violence escalate during any natural disaster, especially gender-based violence, because of the financial crisis

d) Displacement as a result of natural disasters is a common occurrence, and one of the main reasons for this is to find a new economic activity

e) when men find it difficult to find work in new places, they become frustrated and distressed. Furthermore, this frustration and misery lead to violence against women in their families

f) In disaster-prone communities, dowry is another significant determinant of violence against women. The major cause for prevalent dowry practices, along with existing societal customs, is abject poverty. Those who lose their homes and other possessions due to a disaster put pressure on their spouses to get money from their families

g) Women in these areas are subjected to a wide spectrum of violence. They, particularly married women, are the most extreme victims of physiological assault. Physical violence against women is also frequent in these communities, with most cases perpetrated by their spouses or in-laws. Furthermore, women do not object to this due to fear, shame, or other social factors. Sexual violence is more common among young unmarried women and disabled women

h) Most families have faced difficulties adapting to a new place after being displaced, especially building new shelters and looking for new jobs

i) Child marriage is a common phenomenon in disaster-prone areas due to climate-induced displacement. Furthermore, this has adverse effects on women’s physical and mental health of the child bride. It often leads to death, the leading cause of which is early pregnancy

The study suggests for inclusion of displaced people in existing policies to work on the betterment of these communities. Besides, violence against women in coastal areas should be addressed properly, and intervention of multiple stakeholders is necessary.

*Md. Shakhawat Hossain is currently working at Footsteps Bangladesh – he has 2 years of professional success in the research and development sector. He has completed both bachelor’s and master’s in Disaster and Emergency Management with a specialization in Disaster Risk Reduction and Health from the University of Dhaka. He has a versatile skill set with multiple fellowships and award-winning work in climate change, WASH, and SRHR.

**Arifur Rahaman is currently studying in Master’s final semester at the Department of Sociology, University of Dhaka. He has completed Bachelor’s from the same department. He has worked on various research projects, including identity politics, nationalism, consumption, WASH, GBV, etc. areas. His work is often multi-disciplinary and he is adept at working with people from different disciplines.