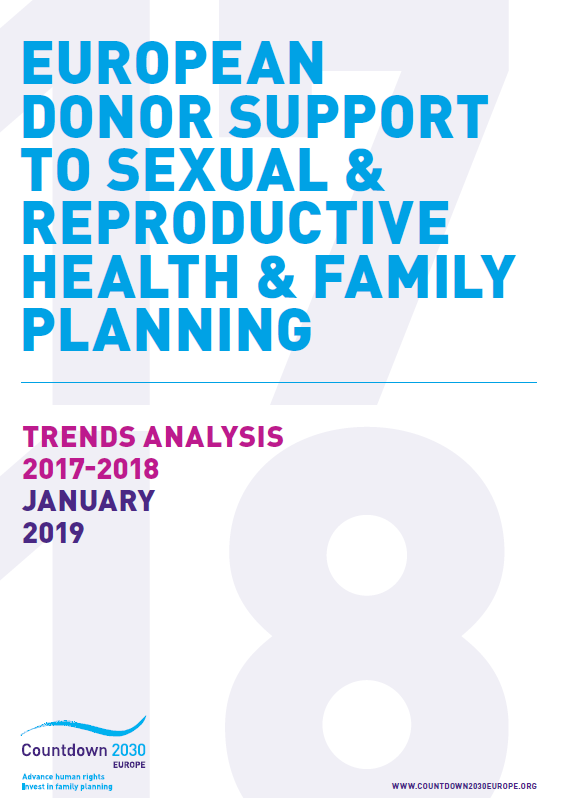 New report by Countdown 2030 Europe, which analyses the most recent trends in SRH and FP policies and funding support by European donor countries.

The analysis shows that SRH/FP funding largely remained protected, even where some cuts to Official Development Assistance (ODA) were made. Most European countries under review (10 out of 12) either increased or maintained funding to SRH/FP, and SRH/FP featured strongly as a key component in humanitarian and long-term development policies across European countries, complemented by renewed commitment and political focus from key European governments.

Denmark showed the most significant increase in percentage growth in funding for SRH/FP, more than doubling its overall funding to SRH/FP. The combined figure for all 12 European donor countries gives an estimated support of 808 million Euros for 2017, an overall increase of 17% on 2016. The UK, Norway, the Netherlands and Sweden remain the largest donors. Amongst the large donors, the Netherlands did not show an increase in funding, but maintained 2016 levels. Increases were also reported by Belgium and Ireland, while Germany, France and Finland sustained 2016 levels. Only Spain and Switzerland decreased their funding.

On the policy side, European donors have strongly increased their commitment and focus on SRH/FP. The five new policy and strategy documents that have been endorsed in 2018 are testament to this. Of particular significance is the increased policy focus on SRH/FP in conflict and humanitarian settings, integrating SRH/FP as a key component in protecting the rights of women and girls, highlighted in new policies by for example Norway, the UK and the Netherlands.

With 2020 fast approaching, Countdown 2030 Europe will hold government’s feet to the fire to ensure SRH and FP remains on top of the international development agenda and funding commitments are translated into action.

For individual country profiles, providing country-specific context, policies and funding information for each of the 12 countries and the European Institutions, please visit: http://www.countdown2030europe.org/country-profiles