Determinants of modern contraceptive use among sexually active men in Kenya 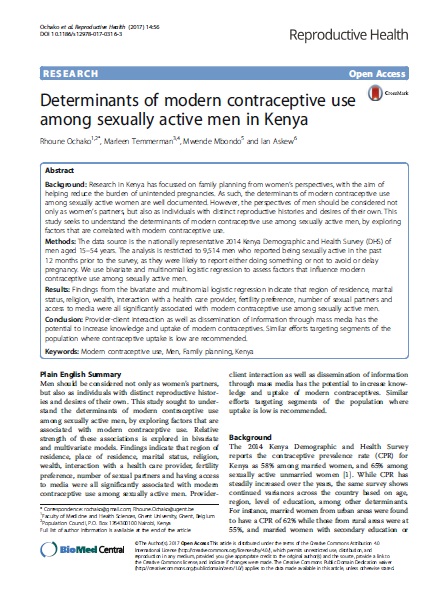 Methods: The data source is the nationally representative 2014 Kenya Demographic and Health Survey (DHS) of
men aged 15–54 years. The analysis is restricted to 9,514 men who reported being sexually active in the past
12 months prior to the survey, as they were likely to report either doing something or not to avoid or delay
pregnancy. We use bivariate and multinomial logistic regression to assess factors that influence modern
contraceptive use among sexually active men.

Results: Findings from the bivariate and multinomial logistic regression indicate that region of residence, marital
status, religion, wealth, interaction with a health care provider, fertility preference, number of sexual partners and
access to media were all significantly associated with modern contraceptive use among sexually active men.

Conclusion: Provider-client interaction as well as dissemination of information through mass media has the
potential to increase knowledge and uptake of modern contraceptives. Similar efforts targeting segments of the
population where contraceptive uptake is low are recommended.

Please click here for the full article in pdf.