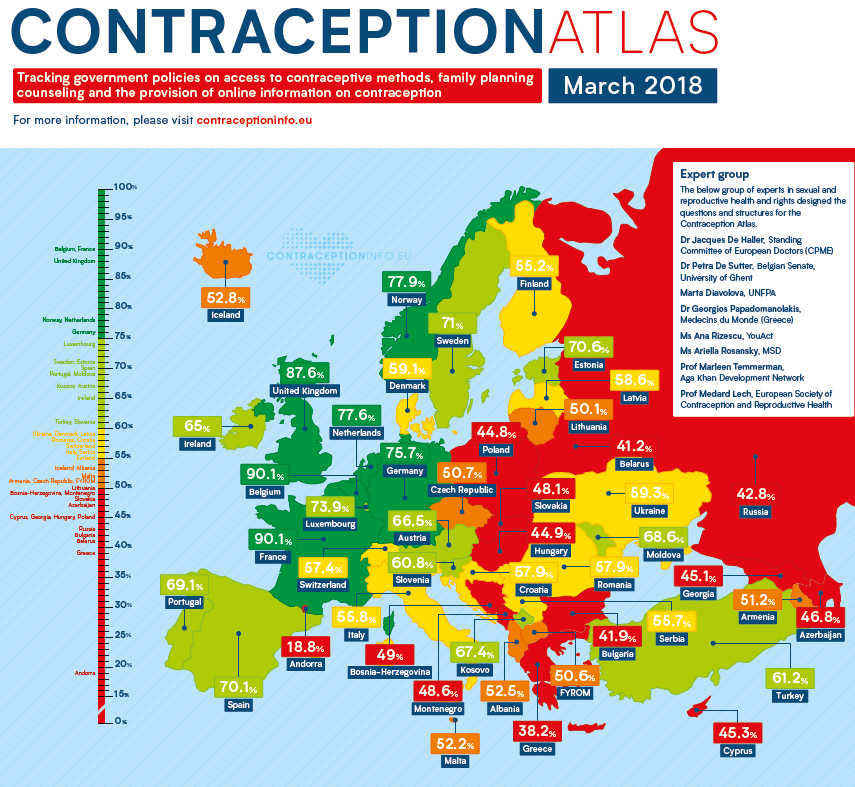 Access to contraception should be a key concern of governments in empowering citizens to plan their families and lives. Yet every country analysed by the 2018 Contraception Atlas needs to do more to improve access. The findings show that for many European countries, ensuring that people have choice over their reproductive lives is not a priority. Now in its second edition, the Atlas tracks government policies on access to contraceptive methods, family planning counseling and the provision of online information on contraception in 46 European states.

Official government websites with information about contraceptive types and where to get them are a miniscule expense for governments, but can make a big difference to citizens seeking accurate information. While there has been an overall improvement in the quality of online information available since the 2017 Atlas was published, still only 11 of the countries surveyed had very good or excellent government supported websites.

The disappointing findings of the Atlas tally with the statistics on unintended pregnancy in Europe: over 43% pregnancies in Europe are unplanned. Contraception is used by 69.2% of European women aged between 15 and 49 who are married or living with a partner — lower than the usage rates of both the North America and Latin America/Caribbean regions.

The Atlas stratifies countries by colour according to their performance: green, light green, yellow, orange, red. The red category, indicating a very poor performance, contains 14 countries — more than any of the other groups.

Belgium, France and the UK rank best of the 46 countries surveyed. A major factor setting these states apart is general reimbursement schemes which cover a range of contraceptive supplies, including LARCs. They have additional policies to improve access to contraception for young people and vulnerable groups, such as low-income women. Excellent government supported websites are also a feature of these top performers. However, even Belgium, France and the UK have much to do in achieving the Sustainable Development Goals, which set out targets for access to family planning.

Now in its second year, the Atlas has been produced by the European Parliamentary Forum on Population & Development (EPF) in partnership with Third-i, while experts in sexual and reproductive health and rights designed the methodology. EPF benefitted from the financial support of MSD to undertake original and independent research which is presented in the Atlas. EPF is grateful to the numerous expert national organisations and individuals who contributed to gathering the data presented in the Atlas. The scope and content of the European Contraception Atlas is the sole responsibility of the EPF.

The findings and more information about contraception in Europe are available at www.ContraceptionInfo.eu