/  Resources  /  Climate Change, Disasters and Gender-Based Violence in the Pacific

Climate Change, Disasters and Gender-Based Violence in the Pacific 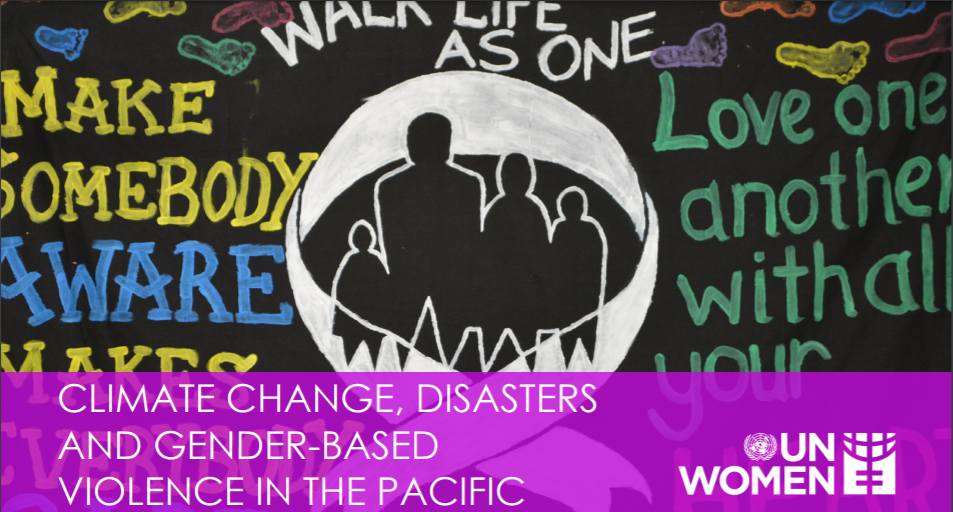 Earthquakes, severe flooding, and tropical storms regularly affect the Pacific region, and these climate-related hazards are expected to increase further as the climate changes. Globally, during the period of 2000-2009, there were three times as many disasters as there were between 1980-1989. The number of people living in the Pacific region who have been affected by disasters has increased from 1.2 million to 18 million since 1980.

Impacts include death and injury; destruction of homes and infrastructure such as hospitals and schools; and loss of assets and livelihoods. The socio-economic impacts of disasters can erode development gains and threaten sustainable development. In particular, global evidence shows that sexual and genderbased violence (SGBV) increases during and after disasters.

SGBV is an existing, persistent, and prevalent problem across the Pacific. Studies conducted in six Pacific Island countries and territories (PICTs) focused on women’s life-time experiences of violence. Of the women surveyed, 60-80% had experienced forms of physical or sexual violence by partners or others.
Women of all ages are affected, including young girls, and types of violence include assault, rape, and sexual abuse of children. The perpetrators of violence were almost always intimate partners and family members, and low reporting rates mean this problem is largely invisible. In situations of disaster, SGBV is a
pervasive factor which heightens existing vulnerabilities. Unless effective mechanisms to address SGBV are put in place, an increase in climate-related disasters in the Pacific will put women at greater risk of SGBV.

Key Messages of the Climate Change, Disasters and Gender-Based Violence in the Pacific Policy Brief:

Read Climate Change, Disasters and Gender-Based Violence in the Pacific