/  Resources  /  Child Marriage, Fertility, and Family Planning in Niger – Results From a Study Inspired by the International Men and Gender Equality Survey (IMAGES)

Child Marriage, Fertility, and Family Planning in Niger – Results From a Study Inspired by the International Men and Gender Equality Survey (IMAGES) 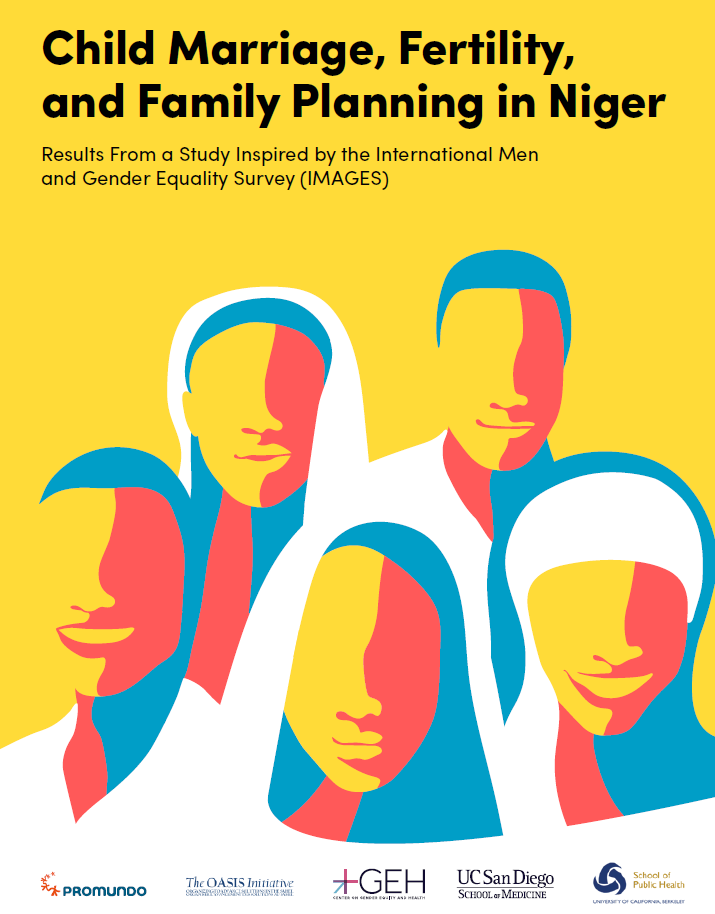 Niger is known for having the highest rate of child marriage – a marriage or union in which at least one spouse is under 18 years old – and adolescent fertility in the world. In Niger, 76 percent of girls will be married before age 18, while 28 percent will be married before age 15 (Institut National de la Statistique [INS] & ICF International [ICF], 2013). While men typically marry much later (at a median age of 24), a small proportion of boys – 6 percent – will also marry before age 18 (INS & ICF, 2013). Childbearing during adolescence is common: about half of women have at least one birth before the age of 20 (MacQuarrie, Mallick, & Allen, 2017).

At the time of this report’s writing, the average 16-year-old girl in Niger is already married. Now considered an adult in Nigerien society, she will quickly begin childbearing and will bear at least 7 children in her lifetime (INS & ICF, 2013). Accordingly, children are valuable assets in Nigerien society: while the average 16-year-old girl will eventually have 7 children, both she and her husband desire even more (9 and 11 total children, respectively, per INS & ICF, 2013).

Researchers and practitioners are increasingly aware of the negative consequences of child marriage. Women who enter into child marriage are more likely to be illiterate, be younger at the birth of their first child, and give birth to more children in their lifetime; less likely to use a method of contraception; and more likely to die during childbirth (Walker, 2013; Greene, Perlson, Taylor, & Lauro, 2015). In addition to child marriage being a human-rights issue, recent research also points to the practice’s costly macro-economic impacts to societies overall (Wodon et al., 2017). Despite this research, in Niger little is known about the motivations, attitudes, and social norms driving girls into marriage by age 15; the consequences in terms of sexual and reproductive health (SRH) outcomes; and the factors driving men into marrying younger, adolescent girls.

Building on the growing evidence base about child marriage and responding to multiple calls for more evidence on younger and older adolescent SRH needs (United Nations Population Fund, 2016; Igras, Macieira, Murphy, & Lundgren, 2014), this study – inspired by the International Men and Gender Equality Survey (IMAGES)1 – offers critical insight into the SRH motivations, attitudes, and behaviors of married adolescent girls and their husbands in Niger, providing findings, lessons, and recommendations for future policy and programming.

This IMAGES-inspired study consisted of mixed-methods quantitative and qualitative research components. Quantitative methods included the integration of IMAGES measures into the baseline survey of a cluster randomized impact evaluation for Pathfinder’s Reaching Married Adolescents (RMA) intervention, conducted by the Center on Gender Equity and Health at the University of California, San Diego in Niger’s Dosso region. Separate from this evaluation, The OASIS Initiative (Organizing to Advance Solutions in the Sahel) at the University of California, Berkeley carried out a qualitative ethnographic study to better understand influences and mechanisms behind young men’s and women’s marriage formation experiences in the neighboring Maradi region of Niger.

The broader impact evaluation design of the RMA intervention was a three-armed randomized controlled trial in 48 villages clustered within three districts (16 villages per district) in Niger’s Dosso region. At baseline, 2,400 married adolescent girls aged 13 to 19  n=1,200) and their husbands aged 15 to 53 (n=1,200) were selected to participate in the study across the three districts (total n=1,200 dyads). The baseline quantitative survey included domains on SRH (specific to contraceptive knowledge, attitudes, social norms, and
behaviors); marital relations and parenting; healthcare access; and gender attitudes and norms. IMAGESinspired questions were integrated into the baseline survey to better understand participants’ gendernormative attitudes and behaviors, in particular related to gender roles, household relations, caregiving, mental health and quality of life, and violence. This report presents descriptive  tatistics, as well as results from bivariate and multiple regression analyses from this baseline data.

The qualitative ethnographic research was conducted in rural Hausa villages in the Dagura and Yanwa communities of Niger’s south-central Maradi region. The purpose of the qualitative study component was to explore in greater depth the mechanisms behind  arriage formation, expectations, and experienced realities among young men and women in the Sahel. The ethnographic approach was employed – including use of participant observation, in-depth interviewing, informal discussions, and archival research – in collaboration with rural young men, their parents, their girlfriends and wives, and community leaders. Five research assistants lived in two research communities in the Maradi region over six weeks. The research assistants participated in the daily life of these communities, bringing together what people said (the content of interviews) and what they did (daily observations in the form of field notes). The qualitative research team analyzed the data through ongoing and iterative thematic qualitative analysis beginning early in the data-collection process and continuing after completion. More details on the qualitative methodology and results can be found in the report Young Men’s Transition to Adulthood: Relationship Formation and Marriage in Maradi, Niger.