/  Resources  /  A nightmare within a nightmare: Taking on sexual and gender-based violence in humanitarian crises

A nightmare within a nightmare: Taking on sexual and gender-based violence in humanitarian crises 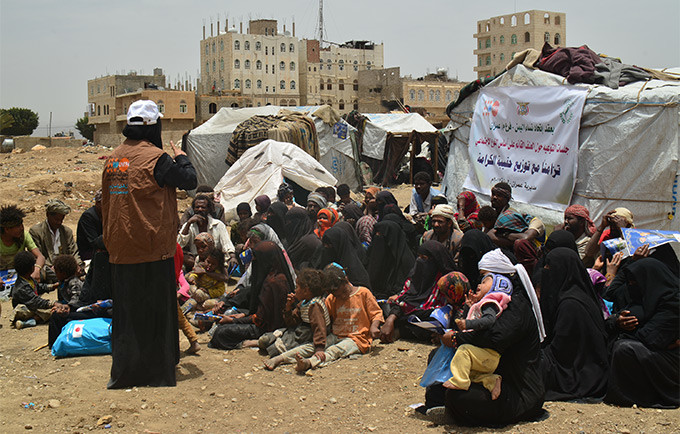 When Maram* showed up at her parents’ house, battered and bruised by her husband, her mother urged her to be less stubborn, more obedient – anything to avoid a divorce.

Her country, Yemen, has been trapped in a grinding conflict for years. The crisis has left women and girls more vulnerable than ever. The prevalence of gender-based violence often increases in times of crisis, as protection mechanisms break down, support services falter and stresses on families mount. In Yemen, reports of gender-based violence increased 36 per cent between 2016 and 2017. And as communities grapple with economic collapse, some parents are even resorting to marrying their daughters off as child brides.

This was Maram’s fate. She was forced to marry at age 16. Her husband was abusive from the start, humiliating her by publicly calling her infertile, then refusing to allow her to see a gynaecologist.

“Then he changed, accusing me of taking birth control pills without his knowledge, insisting on it. A few months later, I was pregnant but he was not happy then, either. He seemed not to want to be a father,” she recalled.

Then he began to beat her.

“He would throw things at me, anything he found in front of him, for trivial reasons like I hadn’t salted his food enough or I woke him up or I spoke while he watched television,” she said.

Sexual and gender-based violence is widespread in emergency settings, yet protection from this form of violence remains severely underfunded, at less than 1 per cent of all funds channelled to humanitarian assistance.

Last week, the Governments of Norway, Iraq, Somalia, the United Arab Emirates, as well as UN OCHA, UNFPA, the International Committee of the Red Cross and other partners, held a ground-breaking collaboration calling for commitments and funding to end these abuses. The two-day conference brought together delegations from 90 countries, as well as top United Nations officials, Nobel Peace Price Laureate Dr. Denis Mukwege and many civil society representatives.

“UNFPA is on the frontlines, coordinating prevention and response efforts and, with our partners, providing life-saving sexual and reproductive health care and specialized services to survivors in countries affected by humanitarian crises,” UNFPA Executive Director, Dr. Natalia Kanem, said at the event. “Yet with rising needs outpacing current resources, more and longer-term funding, including for women’s organizations, is needed to build a more effective response.”

Twenty-one donors at the conference announced a total of $363 million to address sexual and gender-based violence, UN OCHA announced on Friday.

Hundreds of commitments were also made relating to strengthening standards and legal frameworks, operational support, and services for vulnerable persons and survivors of violence.

Help is out there

Maram benefited from the kinds of services that will be strengthened and expanded through these commitments.

Her marriage reached a breaking point after four years, when her grandmother gave her a piece of paper containing a mysterious prayer. She thought Maram and her husband were cursed, and believed the prayer would protect Maram. But her husband found it and accused Maram of witchcraft.

After she returned home from delivering their second baby, he demanded her parents take her away.

He kept their children.

Maram lost all hope until she learned about a hotline operated by the Family Counselling and Development Foundation, a UNFPA partner. She called the hotline, and counsellors helped her receive psychosocial services, as well as legal services. With this help, she was able to regain custody of her children and receive alimony.

UNFPA is in the process of scaling up services for survivors of gender-based violence, including through the Family Counselling and Development Foundation. Last year, two new centres opened up, providing mental health support to more than 7,000 survivors of gender-based violence, and to more than 9,000 other cases. More than 13,000 cases were handled through the nation-wide, toll-free hotline. UNFPA’s protection services for women in Yemen are supported by Canada, the European Union, Kuwait, the Netherlands, Saudi Arabia, Sweden, Switzerland and the United Arab Emirates.

As for Maram, she says that regaining custody of her children has been a turning point. When her divorce was finalized, she was not devastated, as she had feared. Instead, she celebrated.

She went on to complete her high school studies, and has enrolled in university.