/  Resources  /  Recent developments have made female permanent contraception an increasingly attractive option, and pregnant women in particular ought to be counselled about i

Recent developments have made female permanent contraception an increasingly attractive option, and pregnant women in particular ought to be counselled about i 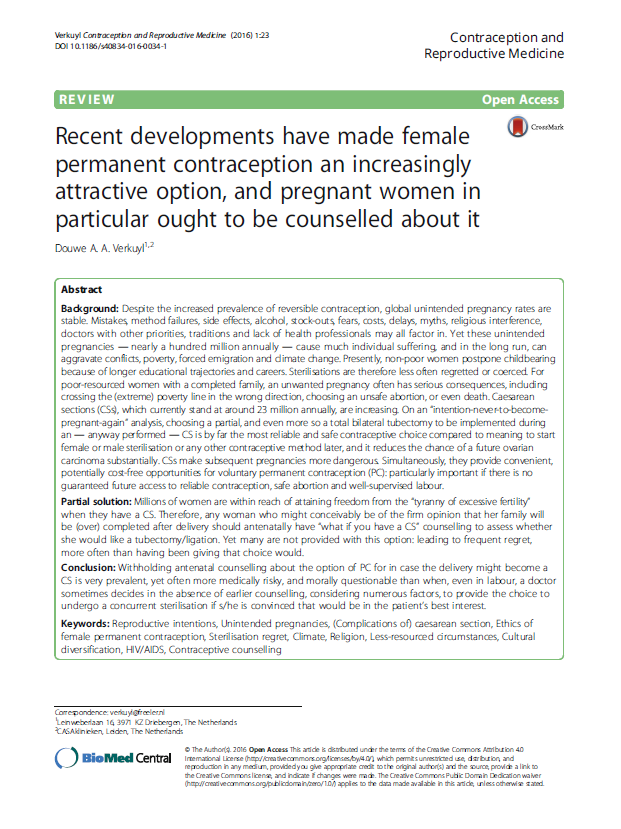 Background: Despite the increased prevalence of reversible contraception, global unintended pregnancy rates are
stable. Mistakes, method failures, side effects, alcohol, stock-outs, fears, costs, delays, myths, religious interference,
doctors with other priorities, traditions and lack of health professionals may all factor in. Yet these unintended
pregnancies ― nearly a hundred million annually ― cause much individual suffering, and in the long run, can
aggravate conflicts, poverty, forced emigration and climate change. Presently, non-poor women postpone childbearing
because of longer educational trajectories and careers. Sterilisations are therefore less often regretted or coerced. For
poor-resourced women with a completed family, an unwanted pregnancy often has serious consequences, including
crossing the (extreme) poverty line in the wrong direction, choosing an unsafe abortion, or even death. Caesarean
sections (CSs), which currently stand at around 23 million annually, are increasing. On an “intention-never-to-becomepregnant-
again” analysis, choosing a partial, and even more so a total bilateral tubectomy to be implemented during
an ― anyway performed ― CS is by far the most reliable and safe contraceptive choice compared to meaning to start

female or male sterilisation or any other contraceptive method later, and it reduces the chance of a future ovarian
carcinoma substantially. CSs make subsequent pregnancies more dangerous. Simultaneously, they provide convenient,
potentially cost-free opportunities for voluntary permanent contraception (PC): particularly important if there is no
guaranteed future access to reliable contraception, safe abortion and well-supervised labour.

Partial solution: Millions of women are within reach of attaining freedom from the “tyranny of excessive fertility”
when they have a CS. Therefore, any woman who might conceivably be of the firm opinion that her family will
be (over) completed after delivery should antenatally have “what if you have a CS” counselling to assess whether
she would like a tubectomy/ligation. Yet many are not provided with this option: leading to frequent regret,
more often than having been giving that choice would.

Conclusion: Withholding antenatal counselling about the option of PC for in case the delivery might become a
CS is very prevalent, yet often more medically risky, and morally questionable than when, even in labour, a doctor
sometimes decides in the absence of earlier counselling, considering numerous factors, to provide the choice to
undergo a concurrent sterilisation if s/he is convinced that would be in the patient’s best interest.