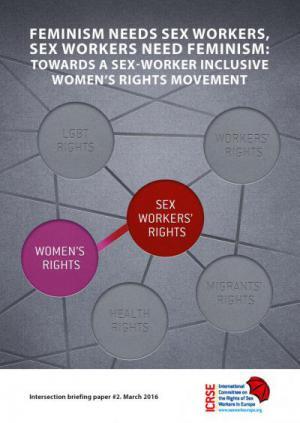 On the 8th of March 2016, International Women’s Rights Day, ICRSE is launching its second Intersection briefing paper exploring the intersection of sex workers’ rights with the rights connected with women. This briefing paper is intended to serve as a tool for sex workers, activists from the women’s rights movement and policy makers to understand the diversity and complexity of sex workers’ lives and social struggles.

Sex workers in Europe and Central Asia often live and work in precarious and dangerous contexts. The reasons for this are the criminalisation of sex work, precarisation of labour, feminisation of poverty and structural, institutional and interpersonal violence against women and LGBT people. This briefing paper explores the intersection of feminist ideologies, women’s rights and sex workers’ rights, and the feminist ideals which are included and supported in sex work activism. It calls upon the feminist movement to consider the growing evidence in support of sex work decriminalisation, build an alliance with sex workers and their organisations, and actively support sex workers’ rights and the decriminalisation of sex work.

In addition to launching this briefing paper, ICRSE was also part of drafting a Feminist Manifesto in Support of Sex Workers’ Rights. The manifesto, which aims to visibilise the support of feminist organisations, collectives and individuals for the recognition of sex work as work and for decriminalisation, has received more than fifty signatures up to date. The signatories call upon the feminist movement to concentrate their resources on including and amplifying sex workers’ voices in the movement and to stop promoting legal frameworks that have been shown to be detrimental to sex workers’ rights.