/  Resources  /  UN Reports on Gender: The Law of Inclusion & Practices of Exclusion

UN Reports on Gender: The Law of Inclusion & Practices of Exclusion 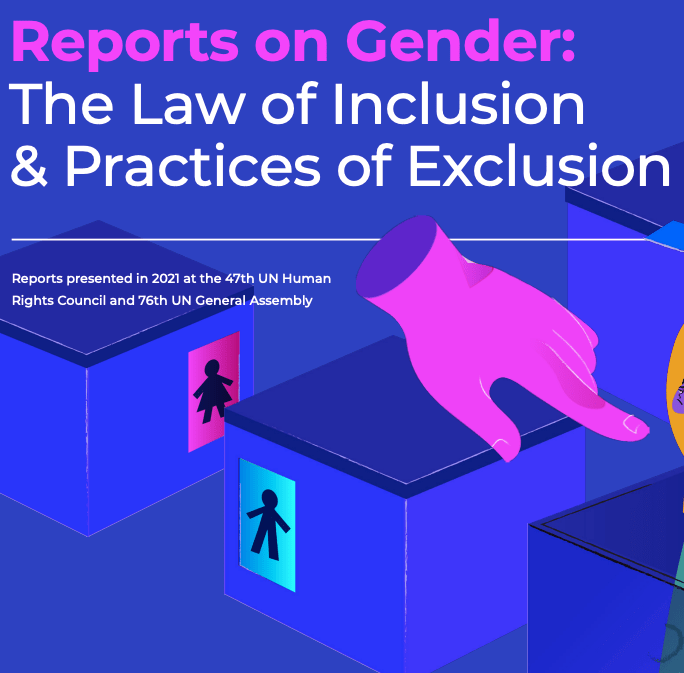 This report was presented in 2021 at the 47th UN Human Rights Council and 76th UN General Assembly.

There has been a steep rise in the use of platforms by extremist political leaders and religious groups to promote bigotry, dehumanise persons based on their sexual orientation or gender identity (SOGI), and foster stigma and intolerance among their constituencies. This trend is generated through orchestrated and well-resourced strategies that aim at negatively impacting the progressive recognition of human rights standards relating to gender equality and sexuality.

The reports issued by the IESOGI in 2021 address this issue from two complementary angles. The first part, “Law of Inclusion”, investigates how the concept of gender is enshrined in international human rights law (IHRL) and concludes that gender identity and expression are protected thereunder, and that gender-based approaches and intersectionality provide a sharp lens for analysing the root causes of violence and Introduction Reports presented in 2021 at the 47th UN Human Rights Council and 76th UN General Assembly discrimination based on SOGI. They enable the analysis of multiple asymmetries of power, deriving from how sex is understood within society, including those that feed violence and discrimination against women in all their diversity.

The second part, “Practices of Exclusion”, analyses backlash against the incorporation of gender frameworks in IHRL. It concludes that exclusionary narratives and actions related to gender and gender identity exploit preconceptions, stigma and prejudice, creating risks for the rights of all women (including lesbian, bisexual and trans women) and contributing to the perpetuation of violence and discrimination based on SOGI.

By: United Nations Independent Expert in Protection Against Violence and Discrimination Based on Sexual Orientation and Gender Identity – IESOGI