/  Resources  /  Sexual Violence Against Men and Boys In The Syria Crisis

Sexual Violence Against Men and Boys In The Syria Crisis 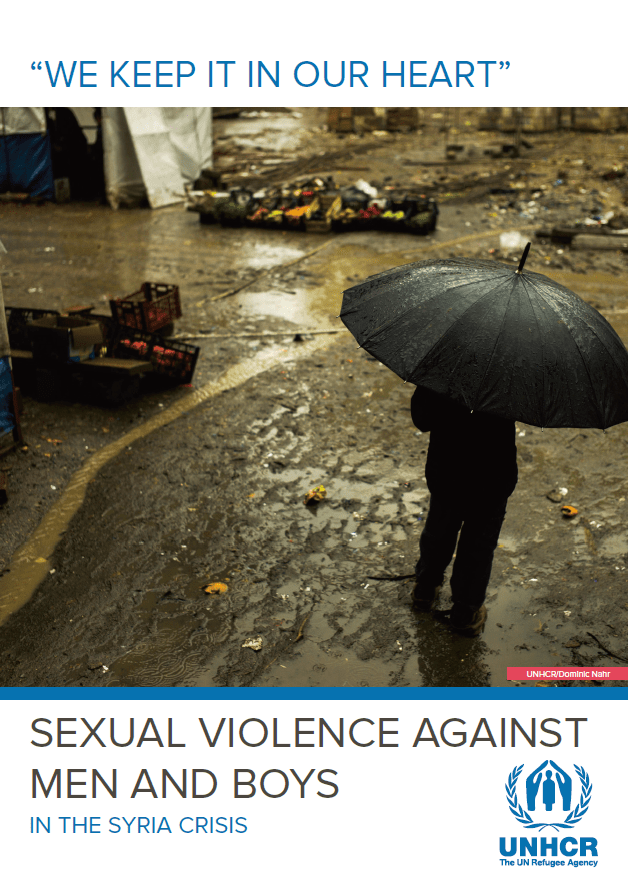 As the civil war in Syria further deteriorates, accounts of systematic human rights abuses continue to emerge, including torture, starvation, and widespread sexual violence against civilians and combatants. More than five million refugees have fled to neighbouring countries in search of safety, yet they continue to face challenges of poverty, discrimination, as well as sexual violence and exploitation. Some attention has been given to women and girls who have suffered sexual violence in Syria and in displacement; however, less is known about male survivors, including ways to meet their needs.

This exploratory study examined sexual violence against men and boys in the Syria crisis and their access to services in Jordan, Lebanon, and the Kurdistan Region of Iraq (KRI). In addition to a review of the literature and an online survey completed by 33 key informants, in-country data collection was undertaken in October 2016. Key informant interviews with 73 humanitarian personnel from 34 agencies were conducted as well as 21 focus group discussions with 196 refugees.

Questions probed the characteristics and scope of sexual violence against men and boys, the impact on male survivors and their families, and the availability and utilisation of services for male survivors in countries of asylum. The findings and recommendations presented in the report
offer a starting point for unpacking and addressing a complex, under-investigated issue. Given the challenges in researching this taboo topic, sexual violence against men and boys is likely occurring under a variety of circumstances not identified in this exploratory study. Additional investigation and attention are imperative to clarify the scope of sexual violence against males, prevent this violence where possible, and effectively meet the needs of survivors.

Though the extent remains unclear, the evidence gathered through this study confirms that men and boys are subjected to sexual violence in Syria and in displacement.

The study identified four patterns of sexual violence against males:

Devastating, multi-faceted impacts of sexual violence on male survivors and their families were documented. Sexual violence, particularly sustained sexual torture, had profoundly debilitating and destabilising psychological consequences. Physically, rectal trauma, often due to sexual torture with the use of objects, in the form of anal fistulae and fissures was reported, resulting in ongoing pain and faecal leakage. Socially, male survivors were shunned and shamed, and some were threatened with death. Economically, adult male survivors faced numerous impediments to employment—under already highly competitive, often exploitative conditions—due to poor mental health, community marginalisation, or compromised physical health. Some boy survivors left school, jeopardising their education. Entire families were impacted: community ostracization,
the onset of domestic violence, and poverty due to loss of livelihood were reported as direct results from the sexual victimisation of a husband, father, or son.

Services and referral mechanisms for young boy survivors are largely in place across the three settings, although staff capacity requires strengthening and utilisation remains low. Targeted services, skilled and sensitised staff, and functioning referral mechanisms for adult male survivors are lacking, particularly in rural and peri-urban areas, with notable exceptions. In Jordan and KRI, a smattering of primarily local organisations has adapted their programming to provide some basic services for male survivors. In Beirut, Lebanon, a small network of agencies is providing sensitised and targeted case management, healthcare, mental health and psychosocial support, legal assistance, and livelihood support to male survivors, primarily LGBTI refugees. A variety of innovative practices were documented across the settings.

Numerous barriers impeded both service provision as well as accessibility. Selected barriers include: strong social stigmatisation against male survivors as well as LGBTI persons generally; absence of effective identification mechanisms; lack of awareness and dismissive attitudes among some humanitarian staff; a shortage of sensitised and experienced providers; a poor evidence base for interventions; legislative barriers; limited donor interest; and lack of clarity regarding the sectoral and institutional responsibility for addressing sexual violence against adult men.

“A man would never speak of this. Why should he? We know that everyone in jail is raped – it is
normal.” -Sami, Men’s Focus Group Discussion, KRI