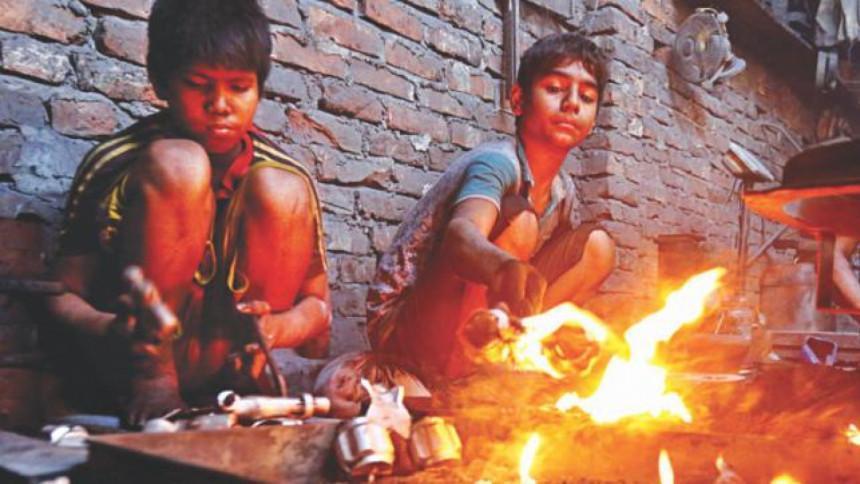 Child labour and child marriages have surged in Bangladesh amid the pandemic, found a recent study by Manusher Jonno Foundation (MJF) – unravelling the decades of progress made on bringing down the two social ills.

Between April and October 2020, at least 13,886 girls between the ages of 10 to 17 were forced into child marriages and 8,140 children were sent to work, found a survey by the MJF, a non-government and non-profit organisation that works to improve the lives of the poor and the marginalised communities.

“Child marriage and child labour have increased due to the pandemic — and poverty was the main reason,” said Shaheen Anam, executive director of MJF, at a webinar on bringing children back to classrooms in the post-pandemic world.

MJF and the Citizen’s Platform for SDGs, Bangladesh jointly organised the webinar, which included a class 10 girl student from Nilphamari who was married off during the pandemic and a student of Kamrangirchar who was forced into child labour.

“Maybe, the parents thought of marrying off their girl child and sending their boy child to work as a coping mechanism,” said Anam, also a core group member of Citizen’s Platform for SDGs, Bangladesh.

Of the girls married off, 48% were aged between 13 and 15 years, found the survey by MJF, which was conducted with the support of UNFPA, UNICEF and Plan International in 21 districts. As many as 78% of the marriages were initiated by parents and 35% of them were registered by marriage registrars.

Another survey of MJF found that 2,400 children were forced into hazardous work with lower wages than before and 2,500 children who were enrolled in primary schools with MJF partner support went to work due to their families’ financial crisis. Another 3,240 children came from rural areas to work as child labour. Children were one of the worst affected by the pandemic fallout, said Debapriya Bhattacharya, convenor of Citizen’s Platform for SDGs, Bangladesh.

“Many children entered the workforce for the first time to help support their families. Those children had to work because their families did not have enough food and their parents lost jobs when businesses were shut down,” Anam said.

Researches show that the drop-out rate among the girl students was more, said Bhattacharya, also a distinguished fellow of the Centre for Policy Dialogue (CPD). About 10 to 12% of girl students had become victims of child marriage, while many did not fill up forms for sitting in the upcoming SSC exam, he said.

“We are in the dark how the education losses incurred due to the pandemic closure will be recovered. Without a social movement it will be tough to overcome the issues like child marriage and child labour,” Bhattacharya said.

Subsequently, the local administration and the other agencies responsible for stopping child marriage and child labour should remain more alert, Anam said. “They should be made accountable,” she said, while calling for an action plan at the upazila, district and national levels comprising of various diverse stakeholders for bringing back all children to school, including the girls who were married off.

Jasmine Nahar, Nilphamari Sadar Upazila Nirbahi Officer, said they are working round-the-clock to stop child marriage, but on many occasions, marriage registrars, the local religious leaders and even the teachers are non-cooperative regarding the matter.

Bhattacharya proposed special incentives besides stipends for keeping and bringing back all girl students to school. At present, married students are not entitled to stipends, according to Rasheda K Choudhury, executive director of Campaign for Popular Education. She also called for a stipend for students who were victims of child marriage. Choudhury also emphasised the need for accurate data regarding student enrolment, attendance as well as child marriage.

Speakers from the webinar recommended an increase in social protection for girls and boys from low-income families, raising awareness against child marriage by engaging more cultural and religious leaders.

Mustafizur Rahman, distinguished fellow of CPD; Quazi Faruque Ahmed, founder and chairperson of Proshika; Mohammed Nannu Mollah, joint secretary at the labour and employment ministry; Nazma Sheikh, deputy secretary at the primary and mass education ministry; Belal Hossain, director at the Directorate of Secondary and Higher Education; and Mostafizur Rahman, joint inspector general at the Department of Inspection for Factories and Establishments, spoke among others.

Towfiqul Islam Khan, a senior research fellow at the CPD, moderated the programme.