/  News and Blogs  /  Op-ed: Indigenous Women and the Coloniality of Gender

Op-ed: Indigenous Women and the Coloniality of Gender 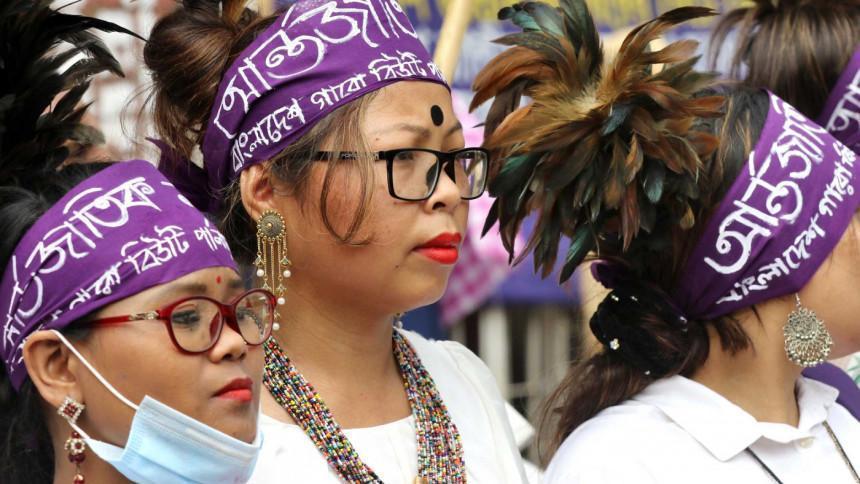 This is an excellent opinion piece authored by Uchacha-A Chak. She is a researcher, activist, and a member of Lokayoto Bidyaloy.

Violence against women is normalised in our societies to such an extent that it is almost invisible, like the air we breathe. Neither the perpetrators nor the systems that permit and breed violence against women are put on the stand. Inevitably, the blame falls on the women, who have been beaten, raped and/or murdered because they were “asking for it”, by being in the “wrong place” at the “wrong time,” with the “wrong person” or for wearing the “wrong clothes.”

It is important to ask why and how indigenous women’s intersectional identities of being “women” and being “indigenous” make them more susceptible to violence. To answer this question, we have to go beyond the narratives of the prevalent culture of impunity and the “ineffectiveness of law and order.” Many theorists, including Maria Lugones, claim that it has a lot to do with the way the concept of gender was reconfigured due to colonial intervention, and how it changed the region’s social relations—a process she identifies as the “coloniality of gender.”

To be sure, no one can say exactly what pre-colonial societies were like. We can only gain perspectives from fragments of written and oral histories. These suggest that both in Africa and in our Indian subcontinent, pre-colonial conceptions of gender were complex and fluid, and they were structured differently from European conceptions, which are prevailing in most of the world now.

Let me share an example from the indigenous community I belong to—Chak in the Chittagong Hill Tracts (CHT) of Bangladesh. One of the elders, who is in her nineties now, once pointed out to me how sexual ethics in her youth were far different from the ones we practice today in our Chak community. She told me a love story about a young couple who could not get married because their parents did not get along. So the woman married another man who was selected by her parents. The surprising part of the story for me was that the woman was visibly pregnant with a child from her previous lover during the time of her marriage. I asked the elder, “And everyone was okay with it?” She replied, “Everyone, including the parents of the boy who was marrying her, knew about the romantic relationship, and becoming pregnant is a common consequence of making love.” Lowering her voice, she went on to say, “But these things are seen as immoral now. When a woman or girl becomes pregnant before marriage, she and her family get a bad name.”

This incident tells us that, in our Chak community, women did not use to be named and shamed for the act of pre-marital sex and pregnancy in a not-very-distant past (approximately in the 1950s). But now, not only is the woman condemned for such acts but their families are also socially humiliated. The other observation from the aforementioned case is that neither the woman nor the man was criticised for pre-marital sex and pregnancy, whereas now, the blame and shame of such acts fall solely on the shoulders of the women. It means that, from the 1950s to 1980s and onwards, not only did the ethics related to sex and marriage change drastically, but the position of women in the Chak community has been further subordinated. So, what happened during this time to cause such a shift?

Perhaps another story can help us understand what happened. My mother (anno) remembers, in the late 1970s, the Chak leaders who had travelled outside the community and been exposed to dominant Bengali culture had declared that wearing short na-phings—the traditional handwoven mini-skirt-length garb of Chak women—was “shameful,” and so was bathing “naked” in the river. They also explained that times were changing and to protect themselves from outsiders (Bengalis), the Chak women should wear longer na-phings. Gradually, younger women in the community doubled the length of their na-phings to adhere to the newly founded “modest” behaviours for Chak women. It would be relevant to remember that this was the time when the Bangladeshi nation heavy-handedly asserted nationalist agendas in the Chittagong Hill Tracts through extensive securitisation and state-sanctioned population transfer from the plains to the hills. It was a population which had different ideas and expectations of gender, negotiated by different religious and colonial experiences.

This encounter of two peoples thus brought about intimate violence to almost every aspect of how indigenous women go about their lives. My mother’s story is only one small example, out of thousands, of how cultures and gender norms of indigenous communities were reshaped by outside influences. Ideas of modesty and gendered roles have also changed and a gradual subjugation of women’s position in the name of modesty could be observed. This way, indigenous women became the subject of surveillance and moral policing based on the changed concept of “modesty.”

As this concept permeated into our communities, indigenous women are now having to deal with violence against themselves, inflicted both by indigenous men and by non-indigenous men. It also entails their dehumanisation by Bengali males and females.

This is what coloniality of gender does to our cultures, our psyches and our bodies. We, the indigenous women, inflict violence on ourselves by continuously trying to fit into the foreign and “appropriate” ethnical and gendered roles, responsibilities and behaviours. And those to whom we are subjects of subjugation (men from the same community, men and women from the more dominant communities including Bengali, and traditional and/or state-sanctioned justice systems) continue to violate us by pointing out how we fail to fit these standard roles.

To be clear, there is no way of claiming that pre-colonial societies were non-patriarchal, but the patriarchies and masculinities we experience within our indigenous cultures now are the direct results of colonisation(s).

I am not asking to go back to a glorious past. We cannot, because the past is always constructed against the present we live in. Locating roots of violence against indigenous women in colonial legacies does not mean looking for solutions from or reviving pre-colonial socio-cultural settings, or romanticising the pre-colonial time. Rather it is about understanding how colonisation(s) occurred in our contexts, how coloniality of power and coloniality of gender are still at work, and how they shape and dictate our minds and bodies through socio-cultural and legal institutions. Only with an understanding of how the larger dominant social order is, will we be able to challenge hegemony and liberate the subjugated from oppression.

Now, who are the oppressed? In fact, everyone is, including Bengali females. Even males (both Bengali and indigenous) who seemingly enjoy greater power over women do so because society expects and allows them. They can also behave differently if we can imagine our society differently.

Thus, locating the roots of gender-based violence to colonial reconfiguration of gender allows us to understand that our (indigenous female and males, and even Bengalis in general) struggles are connected. Decolonisation is not about merely being free from visible control of the British empire, or Pakistani rule, or Bengali hegemony (in the case of indigenous women in Bangladesh). It is about unpacking how the oppressive systems came into being in post-colonial countries. The visible control can be fought against, but the value systems they leave behind are harder to battle since they are invisible. That is what we should all work together to combat, and that is where we should strive to build our resistance against non-hegemonic/non-binary and respectful relations by reimagining our relationships. And also by keeping in mind that decolonisation is “a long-term process involving the bureaucratic, linguistic and psychological divesting of colonial power,” as Maori intellectual Linda Tuhiwai Smith stated in her 2010 book, Decolonizing Methodologies: Research and Indigenous Peoples.