/  News and Blogs  /  Implementing the National Action Plan on Women, Peace and Security 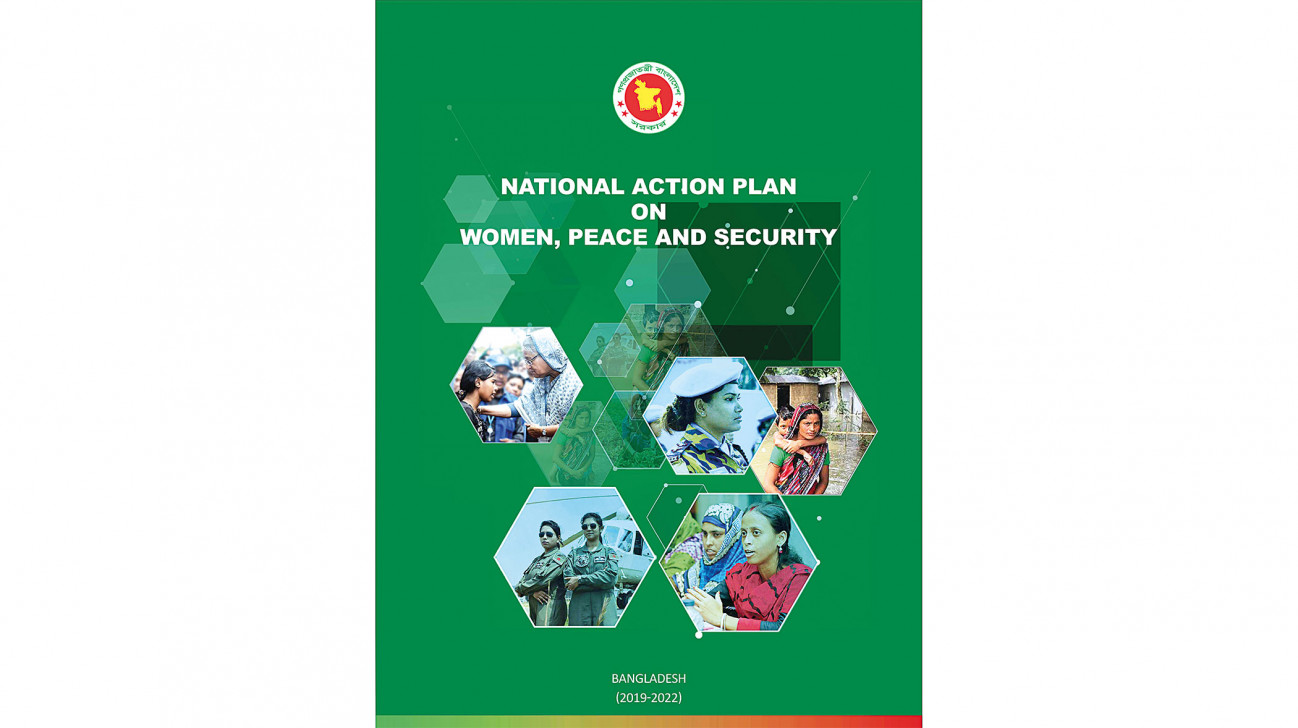 In 2019, the Ministry of Foreign Affairs (MoFA) Bangladesh, in collaboration with the UN Women Bangladesh country office, published the National Action Plan (NAP) on Women, Peace and Security (WPS) 2019-2022. The NAP had set out a list of expected outcomes and mapped out the steps involved in obtaining them in three years. Although considerable time has passed since the publication of the NAP, little to no action has been undertaken by the government stakeholders in bringing the Plan into fruition.

The NAP has been designed pursuant to the UN Security Council Resolution 1325 of 2000 on Women, Peace and Security. The UNSC Resolution addresses the impacts of war and conflict on women and girls as well as the role women and girls can play in developing peace-building and conflict resolution efforts. The NAP reiterates Bangladesh’s active role as a non-permanent member of the UNSC in adopting the Resolution in 2000. It also highlights both historical and present-day situation in Bangladesh which makes it a significant stakeholder in the utilisation of the UNSC Resolution. The NAP looks back upon the history of the 1971 war and the impacts of the war on women and girls while also mentioning the judicial process of prosecuting crimes of violence against women and girls (VAWG) under the International Crimes Tribunal Act (ICT Act) 1973 as well as rehabilitation measures undertaken to provide victims of VAWG with training, employment, emergency abortion measures as well as foreign adoption options. With regard to present-day need for lasting efforts dedicated to women, peace and security, the NAP focuses on the Rohingya women who have migrated from situations of conflict in Myanmar and into Bangladesh.

The NAP divides the principles enshrined in the UNSC Resolution into the following broad categories: (i) prevention (ii) participation (iii) protection, relief and recovery, and accordingly sets out objectives to be achieved under each category and activities to be conducted in order to achieve said objectives. ‘Prevention’ refers to steps undertaken to prevent conflict, violence and extremism and their disproportionate impact on women and girls. The objectives to be achieved include increased awareness on causes of violence and extremism by government institutions and knowledge on how to address them; and increased gender sensitisation reflected through policy measures effective in promoting social cohesion. These objectives are sought to be achieved with research and analysis of existing policies to identify practices that can be replicated or expanded; as well as developing educational curriculum for all institutions that promote tolerance, inclusivity, diversity and gender equality.

The second category, ‘participation’, refers to increased access of women to decision-making process relating to peace and security issues, enhanced leadership capacity of women in local, sub-national and national level, and increased awareness on the benefits of involvement of women in such decision-making. The NAP sets out activities such as developing gender-sensitive laws and policies to promote women’s participation in decision-making, developing modules on women, peace and security for public servants; conducting national awareness campaigns highlighting the importance of women’s participation in decision-making process, organising WPS trainings for female local government representatives, organising trainings on conflict resolution etc.

‘Protection, relief and recovery’ refers to ensuring security and human rights of women and girls, specifically in the context of situations of armed conflict or violence. The objectives sought to be achieved under this category relate to increased gender-sensitivity in government stakeholders, law enforcement, UN peace troops, first responders etc. in order to properly equip them to protect human rights of women and girls, address gender-based violence and protect them from sexual exploitation. The activities planned to be conducted include specialised training modules aimed at increasing women’s participation in security sector; conduct trainings that promote zero-tolerance policy on gender-based discrimination and sexual exploitation; prepare disaster management committees to better address and prioritise needs of women and girls; involve more women as first responders etc.

Although the NAP aims to undertake several positive steps towards the realisation of its commitment under the UNSC Resolution 1325, the NAP has unfortunately been left at a nascent stage even two years after its publication. The Coordination Committee under the leadership of MoFA is yet to be convened and naturally, all further implementation mechanism, therefore, remains uninitiated. Dr. Meghna Guhathakurta – Executive Director of Research Initiatives, Bangladesh and former Professor of International Relations at the University of Dhaka – states that the COVID-19 pandemic has substantially delayed the implementation of the NAP and the government may consider extending the same agenda of the NAP for two more years. She further notes that although the government has not yet taken any concrete steps, there are existing activities being undertaken by CSOs and UN bodies under the international principles while also taking note of the NAP, examples of which include the work being done in relation to the Rohingya women in Cox’s Bazar. Reflecting on the challenges in proper implementation of the NAP, she notes that the first and most important challenge is training the government officials on WPS as has been done in relation to the Right to Information Act and opines that at present there are no coordinated efforts by the government to ensure such training.

Dr. Guhathakurta observed that like other issues pertaining to women, the National Action Plan on Women, Peace and Security has been sidelined. Therefore, it is of utmost importance that the government commits to the implementation of the National Action Plan. As way of recommendation, Dr. Guhathakurta notes that in other parts of the world, similar trainings are being conducted online and the Bangladesh government should also take steps to kick-start the implementation process. For this, firstly, the coordination committee must be formed and the responsibilities must be assigned to relevant ministries – for example, Education Ministry can be entrusted with the responsibility to develop the curriculum; the Law Ministry may be tasked with a review of the laws and policies etc. Secondly, online or offline trainings familiarising the government officials with the NAP must be undertaken. Until these initial steps are taken, the implementation of the NAP cannot be mapped out.

Connections between GBV and climate change in Bangladesh –...