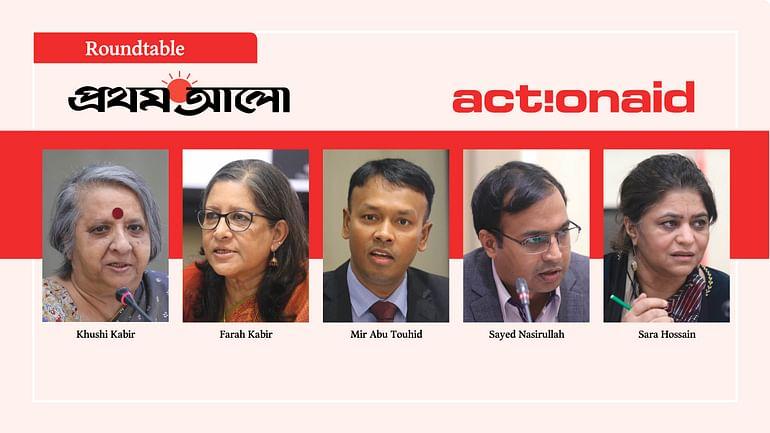 Just as people’s online activities have increased in the country, so has abuse and violence against women in the cyber world. Over 50 per cent of women who use the internet are victims of online violence. Demands have been voiced for a quicker and easier way to get a resolution to the problem. The issue of ensuring accountability of social media has also been raised.

These issues were raised on Wednesday during a roundtable, ‘Prevention of online violence against women: Challenges and the way ahead’, held at the Prothom Alo office in Karwan Bazar of the capital city. The roundtable was organised by ActionAid Bangladesh with Prothom Alo as media partner. ActionAid country director Farah Kabir moderated the event. The opening address was presented by Prothom Alo associate editor Abdul Quayum.

Speaking at the discussion, Nijera Kori coordinator Khushi Kabir said, a strong social support system needs to be built up to prevent online violence against women. A global movement must be mobilised to prevent such violence and the social media must be made accountable.

Technology was a boon during the prevalence of coronavirus and made life easier, said ActionAid country director Farah Kabir. However, at the same time, the repression of women and girls in society was also revealed.

As part of an initiative of ActionAid Bangladesh, the online content development and research organisation ‘eArki’ ran a survey on online violence against women. The results of the survey were presented by Sumon Rahman, professor of the media studies and journalism department of the University of Liberal Arts Bangladesh (ULAB) and social media expert Faizul Karim.

In the survey carried out from 8 to 18 November, 611 respondents took part, of which 67.47 per cent were women and 32.8 per cent men. Two were non-binary. Of the women, 50 per cent said they had been victims of online violence. This violence was highest on Facebook.

AIG Mir Abu Touhid of the police headquarters’ LIC cell spoke about the complaints that came to the Police Cyber Support for Women Service. He said, most of the cybercrime victims were school and university girls. Work had to be done in this regard. Speaking of the limitations and challenges of the law enforcement agencies, he said there are no guns in the virtual world, no brickbats or sticks. But there is crime. The law enforcement agencies must be prepared. Many women victims of cybercrime do not want to go to the police. He also highlighted the need to the society to be educated technologically.

Dhaka Metropolitan Police’s CTTC unit’s additional deputy police commissioner Sayed Nasirullah highlighted further challenges. He said before the coronavirus outbreak the government had asked for two local representatives of Facebook who understand the local culture and who could give updates on the action being taken on complaints. However, this has not been done so far. The government wanted Facebook to have an office in Bangladesh, but they didn’t do that. He said that the education ministry had taken measures to add digital literacy and ethics to textbooks.

Honorary executive director of BLAST, Sara Hussain, placed emphasis on involving representatives of social media in discussions on online violence. She said it must be seen under what laws the cybercrime cases were filed, adding that everyone simply turned to the Digital Security Act. The Digital Security Act was also misused, she pointed out.

Chowdhury Mohammad Mohaimen, project director of the national helpline for children 1098, said that there needed to be a single platform, rather than many, to prevent online violence. He said, mental support is needed for those who face online violence. Alongside the victim, the family needs counselling too.

There is a lack of technological knowledge among the users, said professor of law at Dhaka University, Taslima Yasmin, adding that teachers and parents needed orientation in this regard.

Chief executive officer of Bangladesh Open Source Network and Women in Technology’s vice president Kaniz Fatima said, women’s education in IT and science was 25 per cent, but there was less participation of women in such professions. There remained a gap in technological knowhow.

Executive director of Kushtia’s Mukti Nari O Shishu Unnayan Kendra, Mumtaz Ara Begum, said stern measures had to be taken to prevent online violence. She requested the law enforcement to look into how to make the matter for women and child-friendly.

Winner of the International Children’s Peace Prize and founder of Cyber Teens, Sadat Rahman, said women are more unsafe online than on the streets. Referring to the work of his organisation, he said they were standing beside the victims as friends, helping them in all sorts of ways.

Founder of Meye Network and president of Ognie Foundaton, Trishia Nashtaran, said alongside the role of the law enforcement in preventing online violence, the authorities of the online platforms must also be accountable. The entire system must be simplified for a resolution to these problems.

Student of Holy Cross College, Labonya Progya, talking about cyber harassment, said most parents are ignorant about the online parent control features. They must learn about this. If a child is victim of online harassment, the parents simply stop him or her using the internet. Parents and teachers must understand and be informed about these matters.