Sex Workers- A real power in curbing the HIV epidemic

“Just imagine – every sex worker has from 3 to 15 clients every day. She works 10 to 30 days a month. There are about 45 thousand of such women in St. Petersburg. If we empower those women with HIV knowledge, skills and rights, each of them can become an “agent of change” for the general population, in particular for the men who use her services,” says Irina Maslova, head of the Silver Rose movement of sex workers and their allies in St. Petersburg. To continue implementing her project to prevent HIV and STIs among sex workers in St. Petersburg, she applied to the Emergency Support Fund for Key Populations in EECA.

About the scene of sex services

We started our activities in 2012. It was so-called HIV and STI prevention “behind closed doors.” Since then, the scene of sex services has changed greatly not only in St. Petersburg, but also in Russia in general. For instance, there are more women migrating from the post-Soviet countries as well as from Nigeria. Many of them are engaged in sex work. Besides, there has been a sharp decrease in the prices for sex services, so today girls have to work more to earn their living. Another driver of change was the global crisis, resulting in many women losing their jobs. Today we see many women over 35 years of age who come into sex work. Taking into account all those changes, we realize that there is a high demand for prevention services. As we know, sexual route of HIV transmission is one of the main ones and is currently prevailing over the injecting route of transmission. In the first 6 months of 2019, sexual contacts accounted for 80.4% of new HIV cases registered in St. Petersburg. 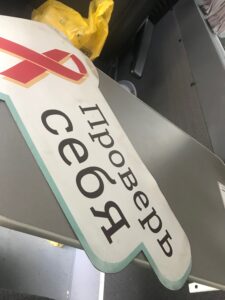 In June 2018, the Global Fund wrapped up its programme in Russia and all the projects among the key populations, including sex workers, were closed. The experience shows that the contacts built throughout the operation of such programmes fail within 2-3 months and the results are lost. I felt it would be a shame to lose everything that the Silver Rose was able to achieve in six years. That is why I started looking for some new sources of funding. I conducted a research study, which showed that thanks to our projects HIV rates among the sex workers in St. Petersburg decreased by 3%. In 2012, this rate was almost 13%, and we were able to bring it down to 10% by 2018. This fact proved the importance of continued efforts, evidence-based approach and peer support both to us and to the government. Within the project implemented with the help of the Emergency Support Fund for Key Populations in EECA, we were able to maintain evidence-based HIV/STI prevention services for sex workers in St. Petersburg. Moreover, this project served as the basis for launching HIV prevention among sex workers in a number of regions of the Russian Federation – Voronezh, Orenburg, Kaliningrad, Moscow region, Yekaterinburg, Rostov-on-Don, Krasnodar and Perm. In those regions, such activities are funded from the municipal budgets.

About numbers and quality

There are 1,652 people already covered with the services of our project. All quantitative and qualitative indicators were fully performed and even exceeded. Among the clients of the Silver Rose, 1,015 people are migrants, with 72% of them coming from the neighbouring countries and 11% – from the African countries. Three persons tested positive for HIV. Apart from direct HIV prevention services, 1,415 women were tested for HIV, 619 women visited friendly doctors (gynaecologists and STI doctors), and 138 people received legal advice. Besides, 12 people received free post-exposure prophylaxis of HIV within the project implemented in cooperation with the AIDS centre.

So far, not everybody understands that sex workers are a real power in curbing the HIV epidemic. Apart from the fact that this group is understudied and unpopular in terms of funding, it is also the most mobile and unstable. Nevertheless, gradually we were able to reverse the situation in terms of the negative attitude among government officials to the idea of implementing HIV prevention projects among sex workers. Now health professionals understand that our work is necessary and important. However, criminalization of sex work in Russia still limits the possibilities of receiving support and funding from the government.

About love and safety

Sex workers are eager to use the services of our project. It is important for us to make any person coming to us feel that she or he is accepted and not judged. In our office, we have an atmosphere of love, kindness, and acceptance. It is a safe space. The main barrier for sex worker is the time that they have to spend to come to our office, but we were able to eliminate it by organizing outreach visits “behind closed doors” to the venues, where sex workers provide their services.